‘Very disappointing’: US envoy rebukes European allies for not supporting its move to restore UN sanctions on Iran

‘Very disappointing’: US envoy rebukes European allies for not supporting its move to restore UN sanctions on Iran

The US ambassador to the United Nations has described the lack of support from Washington’s allies in Europe as “disappointing,” after the US attempted to restore UN sanctions against Tehran.

“This matter is so important that we cannot wait until the arms embargo [against Iran] runs out on October 18,” Kelly Craft, US envoy to the UN, told German daily Sueddeutsche Zeitung in an interview on Friday.

We cannot wait for the world to realize … that China and Russia have the ability to deliver weapons and Iran to buy them to pass them on to militias and other terror groups around the world that are steered by Tehran.

The US tried on Thursday to restore UN sanctions on Iran, including an arms embargo, because, it alleged, Tehran was in violation of a nuclear deal it struck with world powers in 2015.

The US itself abandoned that agreement two years ago. However, all the remaining parties to the nuclear agreement – Germany, France, Britain, Russia, and China – notified the Security Council that they did not recognize the US move.

Last week, the Security Council rejected the US bid to extend an arms embargo on Iran beyond its expiration in October. Britain, Germany and France declared the US attempt to trigger a sanctions snapback “incompatible” with their efforts to support the nuclear deal after the US withdrawal, while Russia and China described Washington’s move to restore sanctions as “illegitimate.” 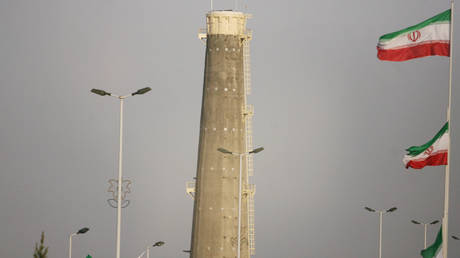