Venezuela claims it has “neutralized” a US-registered aircraft for violating its airspace, in what it said was part of its battle against drug trafficking.

The Strategic Command Operations branch of the Bolivarian National Armed Forces tweeted on Wednesday that it “neutralized” the plane “with military jets according to protocols” after it was spotted in Venezuelan airspace at midnight on July 7. It shared photos of a downed plane on fire, with a soldier standing next to the wreckage.

The images showed the aircraft’s tail number as N339AV. According to the US Federal Aviation Administration website, the aircraft is a Raytheon Hawker 800 owned by KMW FLIGHT LLC, in Delaware. Its last registered flight was from Toluca, Mexico to Cozumel island, Mexico in the Caribbean on Tuesday, Flightradar data shows.

Minister of Defense Vladimir Padrino Lopez tweeted his congratulations to the Bolivarian Military Aviation for “winning in this battle against drug trafficking,” saying Venezuela “will not be a transit for its bastard purposes!” Since 2013, Venezuela has had a shoot-down policy for planes suspected of carrying drugs in its airspace – and it’s not unusual for its military to shoot down planes for drug trafficking.

No information has been released about where the aircraft was allegedly shot down, or about the fate of the pilots.

Unverified reports online also suggested the plane was a narco-jet transporting cocaine, and that it was forced to land and then set on fire by the crew to destroy the cargo. Some on Twitter pointed to tyre tracks on the ground to back up that theory. 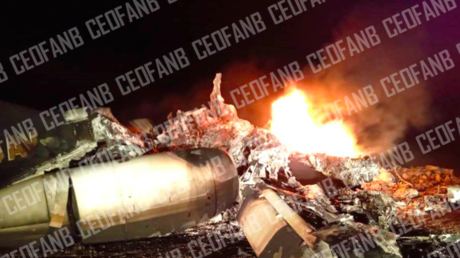