Plumes of water vapor erupting from Jupiter’s moon Europa may come from within the crust itself and reveal whether life could be detected on the icy satellite.

Astronomers have been fascinated by Europa’s apparent plumes since the Hubble Space Telescope spotted an enormous jet of vapor bursting out of its south pole in 2012. The extraordinary ejection appeared to be 200km (120 miles) high, more than 20 times the height of Mount Everest.

Experts previously believed that the salty water moved around within the moon’s internal ocean before periodically spouting forth in giant eruptions. However, new research has proposed that the plumes may originate from pockets of water embedded in the icy shell of the moon.

Where exactly the plumes come from is important because water originating from the icy crust is considered less hospitable to life than if it came from the interior ocean. This is because it likely lacks the energy that is a necessary ingredient for life. In Europa’s ocean, that energy could come from hydrothermal vents on the seafloor.

“Understanding where these water plumes are coming from is very important for knowing whether future Europa explorers could have a chance to actually detect life from space without probing Europa’s ocean,” explained the study’s lead author Gregor Steinbrügge, a postdoctoral researcher at Stanford’s School of Earth, Energy & Environmental Sciences.

An 18-mile-wide (29-kilometer-wide) crater on Europa called Manannán was the focus of their analysis. The hollowed-out area was the result of an impact with another celestial object tens of millions of years ago.

The scientists reasoned that such a dramatic collision would have generated an incredible amount of heat. They then modeled how the melted ice and subsequent freezing of the water pocket within the icy shell could have pressurized it and caused the water to burst out in enormous plumes.

“The comet or asteroid hitting the ice shell was basically a big experiment which we’re using to construct hypotheses to test,” said co-author Don Blankenship, senior research scientist at the University of Texas Institute for Geophysics (UTIG). “Our model makes specific predictions we can test using data from the radar and other instruments on Europa Clipper.” 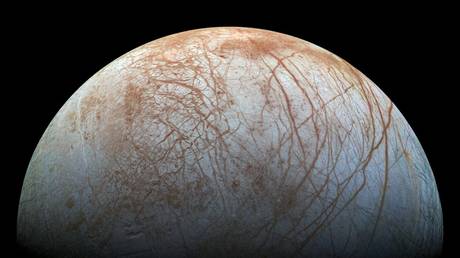