Unknown vandals have defaced a memorial wall in French village of Oradour-Sur-Glane, that saw the country’s largest massacre of civilians by the Nazis during World War II. French authorities vowed to bring the vandals to justice.

The offensive graffiti was discovered on the memorial wall at the entrance to the Center for Remembrance late on Friday.

The vandals crossed out the inscription ‘Martyr Village’, spraying ‘Liar Village’ instead. The graffiti also reads “Reynouard is right”, in an apparent tribute to Vincent Reynouard, a prominent French revisionist, Holocaust denier and neo-Nazism proponent, repeatedly jailed for his beliefs.

The incident has been condemned by France’s top officials who vowed to identify those responsible and bring them to justice. President Emmanuel Macron said that “everything will be done” to catch the people behind this “unspeakable” act. French PM Jean Castex said the vandals’ attack “dirties the memory of our martyrs,” while Interior Minister Gerald Darmanin denounced the incident as “abject filth.”

“Shame on those who did this,” Justice Minister Eric Dupond-Moretti said in a tweet. “All will be done to find and judge those who committed these sacrilegious acts.”

The village was attacked and destroyed by an SS division in June 1944, shortly after the D-Day allied landing in France. Nazi troops herded 642 villagers into a church and barns, and then set the whole village on fire.

The war crime was committed by the Nazis in retaliation for the kidnapping of a German soldier by French Resistance. While the settlement was rebuilt after the war, the ruins of the original village have been preserved as a grim, open-air museum. 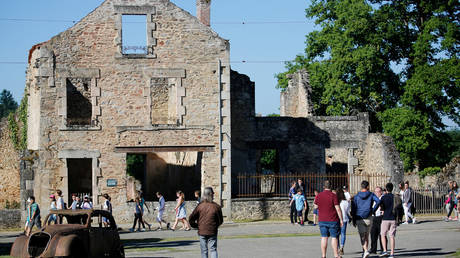 Thousands of tons of cargo to be t...