A group calling itself the Drug User Liberation Front has been handing out doses of additive-free cocaine to residents of the city’s skid row. They say the illegal protest was designed to draw attention to the issue of overdoses.

Vancouver’s Downtown Eastside is a neighborhood teeming with addicts, criminals, and the homeless. The neighborhood is considered the poorest address in Canada and, as of 2016, a third of all those living there were addicted to drugs. Several years earlier, the BBC described the area as being “home to one of the worst drug problems in North America.”

Handing out free drugs in a place like this would seemingly only add to the misery, but that’s exactly what this activist group did on Tuesday. Gathering at an intersection, they gave out phials of cocaine that they claimed had been tested for harmful additives.

Drug user activists have blocked off the corner of Hastings and Dunlevy and are giving out free (tested) cocaine and opium to draw attention to their call for a safer supply pic.twitter.com/cMQIMEl8Wu

According to a local reporter, the group also planned on distributing free heroin, but couldn’t source any that hadn’t been tainted with the deadly synthetic opioid fentanyl.

Cocaine and heroin are Schedule I narcotics under Canada’s Controlled Drugs and Substances Act, with possession and distribution carrying a maximum of seven years and life imprisonment respectively. However, offenders are regularly punished less severely, and Vancouver Police Department enforces drug laws at officers’ discretion. As such, the activists were left alone by police on Tuesday.

Fentanyl contamination is killing the city’s heroin users at record rates. 170 overdosed in May, and more than 5,500 in the province of British Columbia have died of an overdose since 2016. The situation in Canada mirrors that in the US, where deaths by overdose hit a record 70,000 in 2017 and are predicted to rise again this year. The majority have been attributed to the heroin having been adulterated with fentanyl, which makes it up to 100 times more potent than the black-tar heroin better known to addicts. Additives such as benzodiazepine and levamisole have also been turning up with greater frequency in cocaine.

The Drug User Liberation Front wants provincial authorities to give addicts free quality-assured drugs, saying that “access to these necessary substances is both inadequate and urgently needed.”

In addition, the group wants the government to defund the Vancouver Police Department, decriminalize drug possession, and open more safe-injecting centers. Many of the activists who gathered on Tuesday are self-described “drug consumers,” and want to be allowed to continue their habit. “There’s nothing wrong with being a drug user,” one told Vice News. “You can be a drug user and be an absolutely amazing member of society.”

The government likely sees things differently, however. That said, British Columbia did expand access to narcotics at the end of March, prioritizing addicts with a high risk of withdrawal, who presented a crime risk, and were suspected of infection with Covid-19. Still, prevention and enforcement remain cornerstones of the province’s drug policy.

And, while Canadians are broadly in favor of supervised injecting sites, 85 percent surveyed want to see addicts placed in compulsory treatment programs. A majority, too, are against the decriminalization of all drugs. 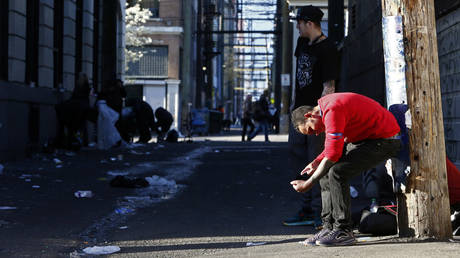 ‘Deaths’ during attack on head of...