US Attorney General WIlliam Barr has promised not to execute a group of Islamic State terror suspects dubbed ‘The Beatles,’ as long as the UK helps with their prosecution. If the UK refuses, the suspects will likely face death.

In a letter to UK Home Secretary Priti Patel on Tuesday, Barr requested that London transfer information on the Islamic State (IS, formerly ISIS) suspects to the US before October 15, stating that “further delay is an injustice to the families of the victims.”

Barr and his predecessor, Jeff Sessions, had until now refused to rule out executing the men in the US, but now apparently places a higher priority on seeing the men tried under US terrorism laws.

Two of the suspects, El Shafee Elsheikh and Alexanda Kotey, are in US military detention in Iraq, while a third, Aine Lesley Davis, is behind bars in Turkey. The fourth and most famous member of the group – Mohammed Emwazi, or ‘Jihadi John’ – was killed in a US drone strike in 2015. All four were raised in Britain, and their accents – heard in a series of graphic beheading videos – led to them being dubbed ‘The Beatles.’

All four pledged allegiance to Islamic State (IS, formerly ISIS) and were active at the height of its power in 2014. They have since had their citizenship revoked by the UK.

Should the UK refuse or otherwise fail to transfer evidence to the Justice Department by October 15, Barr told Patel that Elsheikh and Kotey would be handed over to Iraqi authorities, who would likely execute them after a swift trial.

The group’s shocking beheading videos horrified the world in 2014, and their victims include American journalists James Foley and Steven Sotloff, and aid workers Peter Kassig and Kayla Mueller, as well as British humanitarian workers Alan Henning and David Haines. 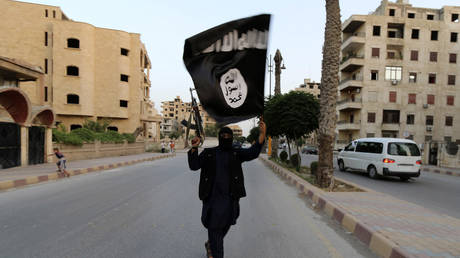