The US strike that killed Iranian General Qassem Soleimani was not justified by any ongoing or imminent attack on American interests and violated the UN charter, according to UN rapporteur on arbitrary executions Agnes Callamard.

Washington has produced insufficient evidence that there was any attack on US interests that might have justified the January 3 drone strike on Soleimani’s convoy as it left Baghdad airport, Callamard revealed in a scathing report due to be presented Thursday before the UN Human Rights Council.

“Major General Soleimani was in charge of Iran military strategy, and actions, in Syria and Iraq. But absent an actual imminent threat to life, the course of action taken by the US was unlawful,” an excerpt of the report published by Reuters on Monday reads.

Callamard, whose full title is UN rapporteur for extrajudicial, summary or arbitrary executions, is demanding accountability for targeted drone killings and wants the deadly weapons to be more strictly regulated. Speaking with Reuters, she called out the UN Security Council for being “missing in action” on the use of the unmanned craft in extrajudicial killings, noting that “the international community, willingly or not, stands largely silent.”

The world is at a critical time, and possible tipping point, when it comes to the use of drones.

The targeted killing was believed to be the first time any nation has claimed self-defense as justification for an attack against state forces in a third state’s territory, she added. However, despite the flagrant violation of the UN Charter, no international body has come forward to punish the US for the murder of Soleimani and several others traveling with him, including a high-ranking Iraqi commander.

The January drone strike was met with a barrage of rockets from Tehran, which hit two military bases in Iraq used by US and coalition forces. While no casualties were initially reported, the possibility of the conflict mushrooming into an all-out war led the Iraqi Parliament to issue a resolution ordering all foreign troops off Iraqi soil. However, the Iraqi government did not attempt to enforce that measure.

The US has repeatedly accused Iran of supporting terrorism and plotting attacks on US forces – claims it rarely attempts to back with proof. Tehran, in its turn, considers the assassination of Soleimani to be an act of state terrorism. Last week, Iran issued an arrest warrant for US President Donald Trump and 35 other Americans deemed responsible for the death of its beloved general, seeking the assistance of Interpol in apprehending the suspects. 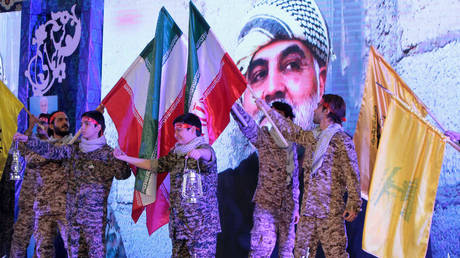