The Turkish president has blasted those involved in the storming of Capitol Hill on Wednesday, which claimed the lives of five people, labeling it a “disgrace.”

“This process in the US, which was described as the so-called ‘cradle of democracy’, really shocked all of humanity,” said President Recep Tayyip Erdogan after a Friday prayer in Istanbul.

We hope that the transition to Mr. Biden on January 20 will be peaceful and that America will go back to being at peace.

Erdogan offered his condolences for those who lost their lives during the unrest and wished a swift recovery to those who were injured.

In the immediate aftermath of events on Wednesday, the Turkish Foreign Ministry issued a statement urging the US to “overcome this internal political crisis in a mature manner.”

The Turkish president joins a long list of world leaders who have condemned the events on Wednesday, when thousands of supporters of outgoing US President Donald

Trump stormed the Capitol building.
World leaders blamed Trump and his refusal to admit defeat in the election. In the words of German Chancellor Angela Merkel because of Trump’s actions “the atmosphere was created in which such violent events were possible.”

The unrest was followed by a wave of DC resignations, including two cabinet officials. Since Wednesday, Trump already twice promised there would be an “orderly” transition of power to Joe Biden. 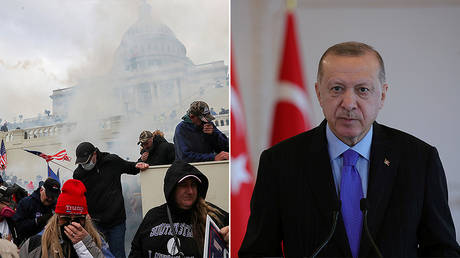