Close
Trending News
HomeWorldUS to mark settlement goods as ‘Made in Israel,’ Pompeo says as he visits occupied West Bank

US to mark settlement goods as ‘Made in Israel,’ Pompeo says as he visits occupied West Bank

US to mark settlement goods as ‘Made in Israel,’ Pompeo says as he visits occupied West Bank

During the first visit by a US secretary of state to an Israeli settlement in the occupied West Bank, Mike Pompeo said on Thursday that imports from such territories will be labeled as Israeli-made goods.

Pompeo, who represents the outgoing Trump administration, met with Prime Minister Benjamin Netanyahu in the morning and then visited the Shaar Binyamin winery near the settlement of Psagot, north of Jerusalem.

He declared in a statement that all imports from Israeli settlements in the occupied West Bank to the US must now have the labels “Made in Israel” or “Product of Israel.” The new guidelines remove the current distinction between products made within Israel and those produced in the occupied areas.

Washington will also consider the Palestinian-led ‘Boycott, Divestment and Sanctions’ movement “antisemitic” and cut off government support for any organizations taking part in it, Pompeo said on Thursday. Germany has also condemned BDS as antisemitic.

Most world powers consider the settlements illegal and Palestinians view them as one of the main obstacles to their future state, while top US officials have in the past avoided traveling there.

Palestinian officials condemned the visit, with negotiator Hanan Ashrawi telling Reuters that Pompeo’s trip damages the chances for peace and that he “is intoxicated by apartheid wine stolen from Palestinian land.”

On Wednesday, dozens of Palestinians protested against Pompeo’s visit to Psagot. Deputy Chairman Mahmoud Aloul called the US an accessory to the occupation, while his Fatah party would be “very happy to see this US administration gone.”

Pompeo is also expected to visit the Israeli-occupied Golan Heights. Last year, President Donald Trump formally recognized Israel’s sovereignty over the area, which was captured from Syria in 1967. 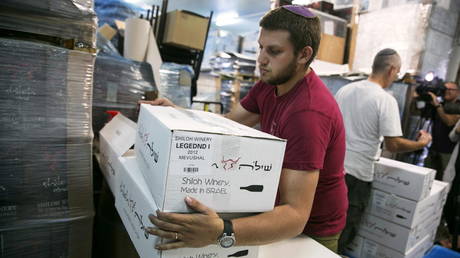 Turn the noise down: Scientists de...

‘Most talked about Christmas light...