Washington has just escalated tensions with Beijing by formally rejecting Chinese territorial claims in the South China Sea on behalf of its allies in the region, just days after two US aircraft carriers sailed through the area.

“Beijing’s claims to offshore resources across most of the South China Sea are completely unlawful, as is its campaign of bullying to control them,”  Secretary of State Mike Pompeo said on Monday, outlining the official US position.

According to Pompeo, China has offered “no coherent legal basis” for its “Nine-Dashed Line” claim in the South China Sea. Beijing first made the claim in 2009, but the US has waited until now to formally reject it.

The PRC has no legal grounds to impose its will on the region and claim resources off the coasts of Southeast Asian states.

Pompeo specifically named a range of features the US does not recognize, from the Scarborough Reef and the Spratly Islands to James Shoal, which he said Chinese “propaganda” presented as the “southernmost territory of China.”

Pompeo cited the July 2016 decision of the Arbitral Tribunal that ruled in favor of the Philippines under the 1982 Law of the Sea Convention – of which both Beijing and Manila are signatories, but Washington, notably, is not.

The US stands “with the international community in defense of freedom of the seas and respect for sovereignty,” Pompeo added, rejecting “any push to impose ‘might makes right’ in the South China Sea or the wider region.”

The announcement comes a week after two US nuclear-powered aircraft carriers sailed through the area. The Seventh Fleet – based in Yokosuka, Japan – said the USS Nimitz and USS Ronald Reagan were conducting a training exercise to promote freedom of navigation.

The stunt was intended to “promote the militarization [and] undermine peace and stability in the South China Sea,” Chinese Foreign Ministry spokesperson Zhao Lijian told reporters.

Beijing has yet to react to Pompeo’s announcement, Nor has Manila, which has found itself sandwiched between the US and China in the disputE. President Rodrigo Duterte complained last year that the US was treating Filipinos like  “earthworms” and making them “bait” for a fight with China.

“Now I say, you bring your planes, your boats to South China Sea. Fire the first shot and we are just here behind you. Go ahead, let’s fight,” he said at the time, in a speech in Leyte province.

In February, Manila had announced it was pulling out of the Visiting Forces Agreement (VFA) with the US, starting the 180-day clock for the treaty to wind down. Duterte then changed his mind at the start of June, citing “political and other developments in the region.” 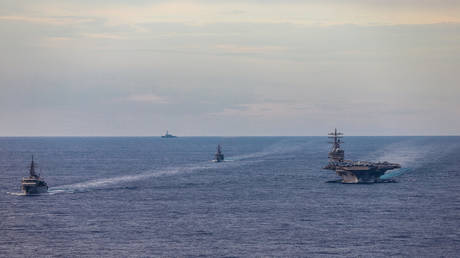 Brits WILL be forced to wear face...