Aside from being an affront to EU sovereignty and an imminent threat to European jobs, the sweeping US sanctions targeting the Nord Stream 2 gas pipeline mark the end of the Transatlantic partnership, Gerhard Schroeder has said.

A sanctions bill currently being debated in the US Congress is “a widespread, unjustified attack on the European economy and unacceptable interference with EU sovereignty and energy security in Western Europe,” former Chancellor Gerhard Schroeder argued in a position paper drafted ahead of parliamentary hearings on the matter.

The penalties – which affect “over 120 shipbuildng, engineering, environmental and security companies that work or have worked with Nord Stream 2” – mark the “definite termination of the Transatlantic partnership,” the retired chancellor’s statement said, as cited by the German business daily Handelsblatt.

“Behind each of these companies are European jobs that are at risk,” it warned. Schroeder’s judgment appears to match that of Nord Stream AG, a company operating the pipeline.

The sanctions, the firm told TASS, would block roughly €700 million from being pumped into finishing the massive construction works at sea and on land. While sizeable, that figure pales in comparison to the roughly €8 billion spent on building the pipeline and auxiliary infrastructure.

Schroeder, who chairs Nord Stream AG’s shareholder committee, warned that an even larger amount of money – €12 billion – would have been spent in vain if the pipeline project isn’t finalized.

At the hearing, there was no shortage of speakers bashing the US for meddling in German and European affairs. “The issue here isn’t about the German-American affairs, as it’s often seen, it is about European sovereignty,” stated Niels Annen, minister of state at the Foreign Office.

That aside, the sanctions move “affects our foreign policy capacities [as] the inconsistent sanctions damage the joint policy towards Russia,” the diplomat warned.

Building the last remaining stretch of the pipeline has proved to be no easy task for its stakeholders. Works were put on hold earlier this year when Allseas – a Swiss pipe-laying contractor – withdrew its three vessels, fearing the impact of US restrictions. Russia has swiftly deployed its own ship to replace the Swiss ones; it is currently moored near the German island of Ruegen, according to the tracking website Vesselfinder. 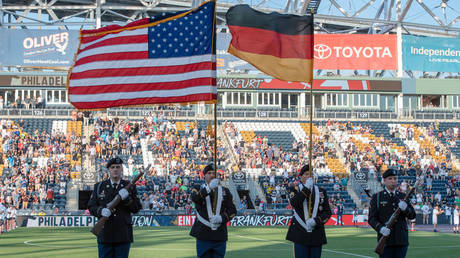