Warsaw and Washington have signed a new security pact, under which Poland will host some 1,000 additional US troops as well as the forward command of the V Corps Headquarters, which was reactivated in February.

The deal was signed by visiting US Secretary of State Mike Pompeo and Polish Defense Minister Mariusz Blaszczak. The ceremony was held in the presence of President Andrzej Duda at his residence in Warsaw.

Among other things, the Enhanced Defense Cooperation Agreement (EDCA) increases the US military presence in Poland by about 1,000 troops from the previous level of 4,500 personnel.

Poland will also host American military support infrastructure, including forward elements of the US Army’s V Corps headquarters, which the Polish foreign minister called “the most important US command center on NATO’s eastern flank” before the document was signed. V Corps was reactivated earlier in February to boost the Pentagon’s European operations.

The deal was signed two weeks after Washington ordered the withdrawal of some 12,000 troops from Germany, marking the largest relocation of US military assets in Europe in decades. Jacek Czaputowicz, the Polish foreign minister, insisted that the additional deployments in his country had nothing to do with the German pullout and “is a separate process that we have been implementing for a long time.” 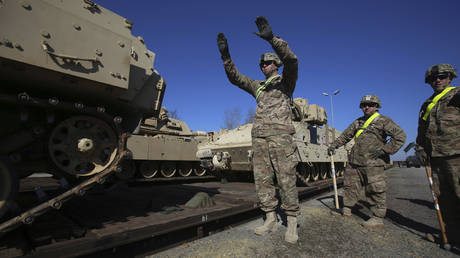