Militants on pickup trucks attacked a logistics supply convoy headed to a US military base in Iraq, forcing it to stop, got the local contractors out of the vehicles, and torched the trucks, according to local media reports.

The incident happened on the Samawah-Diwaniya highway as the convoy, operated by Iraqi citizens and carrying supplies from Basra to one of the US bases in Iraq, came under attack by unknown assailants on Saturday night.

• The US logistics convoy was stopped
• Iraqi Drivers were asked to leave
• Unconfirmed reports of US troops/security were present
• 3 vehicles were destroyed
• Operation lasted under 6 mins
• Location: Samawah-Diwaniya highway #Iraq #USConvoyDestroyed pic.twitter.com/ERU67YKt7p

There were no reports of casualties in the brazen attack, but at least three vehicles were completely destroyed in a raid that apparently lasted less than 10 minutes.

A logistics convoy supplying American forces in #Iraq was targeted this evening between Samawah and Diwaniyah. Over the last few months, these particular convoys have been targeted by “Islamic Resistance” front groups. pic.twitter.com/Fe5jmCVw5z

Videos and photos posted to social media, which purported to have captured the aftermath of the attack, showed intense flames engulfing the trucks.

This viral video purportedly shows a logistic #US military convoy, including 2 fuel tankers and a cargo truck carrying a Hummer, on fire in Al Diwaniyah city in #Iraq. There has been no word on possible casualties. pic.twitter.com/r2Gy3QdUvD

“Four trucks were attacked in the Najme region between Diwaniyah and As-Samawah,” an Iraqi security source told Sputnik, adding that the attackers “asked” the drivers to get out of the vehicles before torching them and fleeing the scene.

#BREAKING #NOW
Minutes ago, a US military convoy was targeted, containing a number of trucks that transported military vehicles and equipment on the road linking the two cities of Diwaniyah and Al Samawah in southern #Iraq.#USA #PMU #IRGC #Iran pic.twitter.com/dwctcYPAtq

The US-led coalition forces in Iraq often rely on local contractors to move supplies between their bases, but it was not immediately clear whose cargo, which apparently included a flatbed truck carrying a Humvee and two empty fuel trucks, was destroyed. 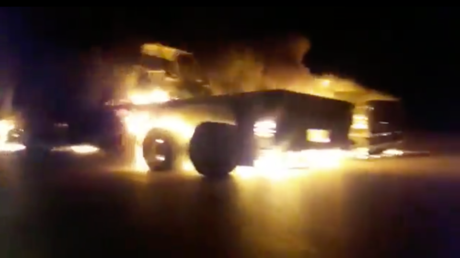