The US Treasury Department has imposed sanctions against seven people it claims are linked to Hezbollah and its financial wing, Al-Qard al-Hassan, labelling all of the individuals as “specially designated global terrorists”.

In a statement released on the Treasury website on Tuesday, the Office of Foreign Assets Control (OFAC) announced it has blacklisted seven people for their alleged connections to Hezbollah and Al-Qard al-Hassan (AQAH).

The sanctions target Ibrahim Ali Daher, who was described in the statement as serving as the chief of Hezbollah’s Central Finance Unit, and six others, who are accused of using personal bank accounts to cover up the Iran-backed movement’s activities.

“From the highest levels of Hezbollah’s financial apparatus to working level individuals, Hezbollah continues to abuse the Lebanese financial sector and drain Lebanon’s financial resources at an already dire time,” the US Treasury said in a statement.

Such actions demonstrate Hezbollah’s disregard for financial stability, transparency, or accountability in Lebanon.

The US has previously accused AQAH of being established to act as a “cover” for the financial activities of Hezbollah and allowing the group to present a front on the international financial system, sanctioning it in 2007.

The individuals accused have not publicly commented on the sanctions and Hezbollah has not responded to Treasury’s allegations. 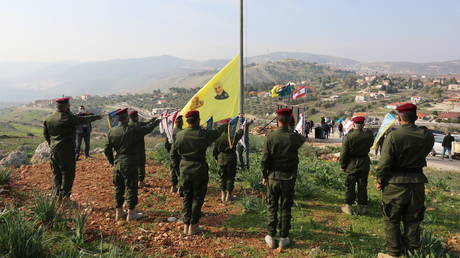