Pink Floyd founder Roger Waters sees eerie similarities in Israel’s treatment of Palestinians and US police departments’ treatment of their own citizens. The legendary singer told RT it’s “about time” the world called out both.

“Thank goodness there’s an uprising,” Waters told RT’s ‘Going Underground’ on Tuesday, referring to the wave of protests and riots sweeping the US since the killing of George Floyd by a police officer in Minneapolis last month. “It’s about time.”

The kneeling chokehold that killed Floyd was described by Waters as “an Israeli technique, proudly developed by the IDF in the occupied territories in Palestine.”

An Israeli national police spokesman recently denied that his country’s police force uses such a measure on suspects, and added that Israeli counterterrorism officers never taught the move to American police officers in any joint training sessions. However, US police departments do regularly send officers to Israel for training, and such sessions are also held on US soil. The Minneapolis Police Department, where Floyd’s killer worked, sent 100 officers to an Israeli policing conference in Chicago in 2017.

“Those streets in the United States are occupied,” Waters declared, slamming the “fascist state of Israel” for helping militarize beat cops in the US.

Waters is a longtime critic of the Israeli state policies. In addition to celebrating the protest movement in the US, he called on the international community to condemn Israel’s planned annexation of Jewish settlements in the occupied West Bank next week. 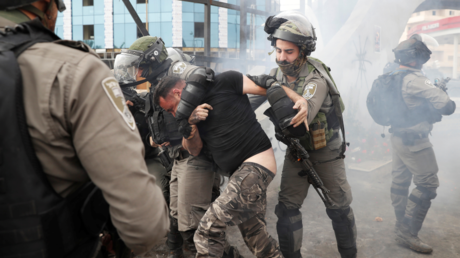 Brits can jet off to France, Italy...

Has Hajj been CANCELLED over Covid...

‘Without parallel in democrati...