Washington has announced sanctions on senior Syrian government officials and the leaders of several military units, with US Secretary of State Mike Pompeo accusing top National Defense Forces members of subverting a ceasefire.

In a statement on Thursday, the US State Department said it was imposing sanctions on the leadership of a number of Syrian military units, including National Defense Forces commander Fadi Saqr.

The US and its allies are “united in continuing to apply pressure” on the Syrian president and his government “until there is a peaceful, political solution to the conflict,” Pompeo said in the statement. “Assad and his foreign patrons know the clock is ticking for action.”

He warned that Washington will continue to “impose costs on anyone, anywhere who obstructs a peaceful political solution to the Syrian conflict.”

The US Treasury, meanwhile, issued sanctions on Luna Al Shibl, President Bashar Assad’s top press officer, and Mohamad Ammar Saati bin Mohamad Nawzad, a prominent member of the Syrian Baath Party. Under the sanctions, “all property and interests in property of these persons that are in the US” must be blocked and reported to the Treasury’s Office of Foreign Assets Control (OFAC), while Americans are banned from “certain transactions” with those covered by the restrictions.

Several rockets exploded on Tuesday in the territory of a US military base in the north of Syria’s Deir ez-Zor governorate, Syria’s SANA news agency reported. The attack targeted a US base near the Conoco oil field controlled by US troops and Kurdish units.

This is the first-ever attack on one of the 12 military facilities created by the US since 2015 in Syria’s governorates of al-Hasakah, Raqqa and Deir ez-Zor, according to TASS.

US Armed Forces helicopters opened fire on a Syrian government army checkpoint near the settlement of Tel Dahab in the al-Hasakah governorate on August 17. One Syrian serviceman was killed and two others injured, SANA said, adding that the strike took place after Syrian soldiers refused to let a US patrol pass through a checkpoint. 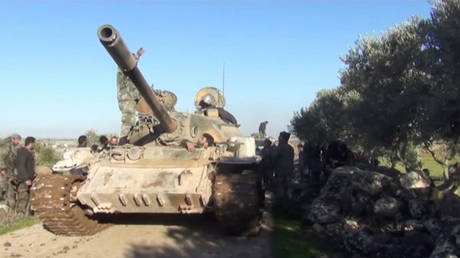