The Islamic call to prayer will ring out from the sixth-century Hagia Sophia again on July 24, Erdogan announced on Friday, after he issued a decree turning the UNESCO World Heritage Site over to the country’s religious directorate. Though the building will be rededicated as a mosque, Erdogan has promised to allow all faiths to visit the iconic site.

The US is “disappointed” in Erdogan’s decision, State Department Spokesman Morgan Ortagus said in a statement on Friday. Ortagus added that the US looks forward to hearing Turkey’s plans to keep the Hagia Sophia “accessible without impediment for all.”

Before the decree, Secretary of State Mike Pompeo said that the change would threaten the Hagia Sophia’s ability “to serve humanity as a much-needed bridge between those of differing faith traditions and cultures.”

Erdogan’s conversion was criticized by Greece, France, Cyprus, and the European Union, which called the move “regrettable.” UNESCO lamented the fact that Erdogan did not consult with the body beforehand, while Patriarch Kirill of the Russian Orthodox Church had previously called the decision “a threat to the entire Christian civilization.”

Built by Byzantine emperor Justinian in 537, the Hagia Sophia changed hands between Orthodox and Catholic faiths until the Ottoman conquest of Constantinople in 1453. Converted to a mosque by the Ottomans, who destroyed its bells, altar and relics, it was repurposed as a museum by Turkey’s secular government in 1934. 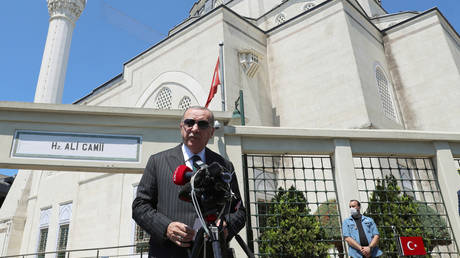