The storming of Capitol Hill gave Americans a taste of violent methods that Donald Trump has employed overseas throughout his presidency, argued Seyyed Hassan Nasrallah, the leader of Lebanon’s Hezbollah movement.

“What the Americans witnessed [on Wednesday] was a small result of the crimes that Donald Trump committed during his four years of presidency in Syria, Iraq and Yemen,” Nasrallah said in a TV appearance, also recalling the assassination of top Iranian military commander Qassem Soleimani in a US drone strike last year.

This time around, however, “Donald Trump applied the same scenario in the US and killed Americans,” he insisted. One police officer and four protesters lost their lives as thousands of Trump’s supporters stormed the Capitol in Washington, where Congress had gathered to formally certify his Democratic rival, Joe Biden, as president-elect.

“This shows that American democracy is a lie, and it is dangerous to let someone like Trump run for president,” the Hezbollah leader said.

It’s only by God’s grace that the world avoided a catastrophe during the four years when the nuclear key was in the hands of an arrogant, domineering and crazy person like Trump.

Nasrallah also pointed out that this week’s unrest in the States “will have repercussions globally,” while voicing hopes that the remaining time until Biden’s inauguration on January 20 will go “smoothly.” 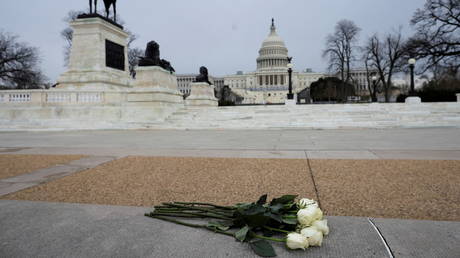 Almost all civil servants want to...