A new study into the blaze that ruined Paris’ iconic Notre Dame cathedral claims that much higher quantities of lead were released into the air than previously thought. Researchers studied soil samples in the wake of the fire.

A fire broke out at the 700-year-old cathedral on April 15, 2019 as it underwent maintenance works, and it rapidly grew into a huge inferno fought by some 400 firefighters. Fortunately, once the flames were extinguished and the site could be checked by experts, it became apparent that the landmark – though seriously damaged – could be restored.

Now, new research says lead levels in the soil samples indicate that nearly a ton of dust of the heavy metal dropped down within one kilometer (0.6 miles) of the site – six times higher than the previous estimate

The study, published on Thursday in GeoHealth, found that outside of this radius, lead levels were even higher downwind of the fire, double those in areas outside the path of the smoke plume.

The study concludes that, for a brief time, people residing close to Notre Dame were more exposed to lead fallout than was previously acknowledged by the French authorities.

Early analysis conducted by France’s Regional Health Agency of the levels of lead outside of the out-of-bounds area surrounding the cathedral showed levels below France’s limit of 300 milligrams per kilogram of soil. At the time, though, it was feared that this was a gross underestimation.

“There was a controversy – were children being exposed or not from this fallout?” said Lex van Geen, a geochemist at Columbia University’s Lamont-Doherty Earth Observatory and lead author on the new study. “So I thought, whether I get a ‘yes’ or a ‘no,’ it’s worth documenting.”

In order to track what had occurred, van Geen and his team went about collecting soil samples from tree pits, parks and other locations around the cathedral, with a particular focus on the northwestern area – where most of the smoke traveled on the day of the fire.

According to the study, it is now extremely hard to ascertain how this may have affected people in the area concerned “because too few soil, dust, and blood samples were collected immediately after the fire.” However, van Geen said it’s possible that the hazard could be significant, adding it’s likely it was underreported by the authorities.

“Our final estimation of the total amount of excess lead is much larger compared with what has been reported earlier by other teams,” said Yuling Yao, one of the co-authors of the study. 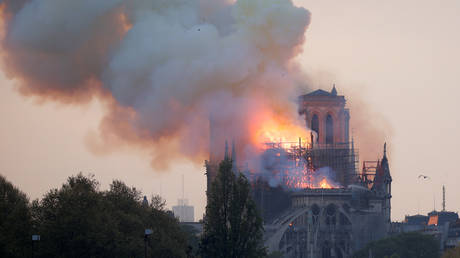