Close
Trending News
HomeWorldUp to 40,000 people left in Afghanistan are eligible for evacuation to Germany – Merkel

Up to 40,000 people left in Afghanistan are eligible for evacuation to Germany – Merkel

Up to 40,000 people left in Afghanistan are eligible for evacuation to Germany – Merkel

Chancellor Angela Merkel has said that there are thought to be between 10,000 and 40,000 people in Afghanistan who worked for development agencies and are eligible for evacuation to Germany, should they wish to leave.

Speaking at a press conference with Austrian Chancellor Sebastian Kurz, Germany’s leader outlined her country’s position following the end of the international evacuation process that foreign governments launched in earnest out of Kabul airport on August 15.

Merkel said that her government is now focused on evacuating local staff who wish to flee Afghanistan, estimating that there’s “more like 10-to-40,000 people” who are eligible to travel to Germany if they want to leave their country. The staff have remained stationed in Afghanistan after serving with development and aid organizations.

The German chancellor did not estimate how many individuals within that group might actually seek refuge in her country, saying that “nobody takes the decision to leave their home lightly,” but indicated that her government would be ready to help them.

Merkel’s comments came after the last US troops left Kabul airport late Monday night, ending the international airlift that had been ongoing since mid-August and handing control of the transport hub to the Taliban. Prior to the departure of foreign troops, the US and Western allies helped to airlift more than 100,000 people to safety, including their own citizens and Afghans seeking refuge amid fear of reprisals.

On Tuesday, Taliban militants celebrated in triumph on the runway at Kabul airport, claiming success in defeating America’s forces, with the insurgent group’s spokesperson Zabihullah Mujahid offering congratulations to Afghanistan and adding that “this victory belongs to us all.” 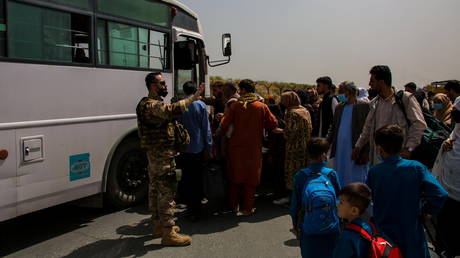