The UN Security Council is set to gather later on Tuesday to discuss the crisis in the disputed Nagorno-Karabakh region, where Armenian and Azeri forces are fighting in one of the worst flare-ups of the decades-old conflict.

Initiated by five EU countries, namely Belgium, France, Germany, Estonia, and the UK, emergency talks are scheduled for Tuesday, according to media reports. Some 15 UN Security Council members will hold talks behind closed doors without the parties of the conflict, possibly issuing a joint declaration after the meeting.

Previously, UN Secretary-General Antonio Guterres underscored “the need for an immediate stop to the fighting and resumption without the precondition of meaningful negotiations without delay.” Major world powers including the US, Russia, France, and Germany, have also urged the adversaries to cease hostilities immediately and resume talks.

The global body convenes on the heels of heavy fighting that erupted suddenly on Sunday morning along the border of Nagorno-Karabakh, involving large-caliber artillery shelling, aerial bombardments, and tank battles. Yerevan, the main backer of the landlocked ethnic Armenian-populated enclave, pinned the blame on Azerbaijan for launching an “offensive,” while Baku insisted it was responding to Armenia’s attacks.

Hostilities have continued into Tuesday morning with no sign of de-escalation. The warring parties have deployed additional heavy weapons systems to the frontline, among them the 300mm ‘Smerch’ multiple launch rocket systems and ‘Iskander’ tactical missile.

As fighting intensified, Armenia, Nagorno-Karabakh and Azerbaijan introduced martial law and called their reservists to arms. Dozens of military and civilian casualties have also been reported from both sides who accused each other of targeting non-combatants. 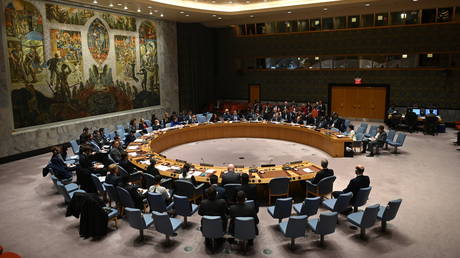