Close
Trending News
HomeWorldUniverse to end with a bang, not a whimper, with explosion unlike anything we’ve ever seen, claims new study

Universe to end with a bang, not a whimper, with explosion unlike anything we’ve ever seen, claims new study

Universe to end with a bang, not a whimper, with explosion unlike anything we’ve ever seen, claims new study

As many ponder the end of the world, given how 2020 has gone so far, scientists theorizing about the universe’s demise think they may know how it will all finish: with a type of explosion we’ve never seen before.

The end of the universe will apparently be marked by a newly-theorized type of supernova, courtesy of so-called black dwarfs, according to a new paper in the journal Monthly Notices of the Royal Astronomical Society.

As the universe slowly dies, and lurches into a cold, dormant state, with temperatures everywhere approaching absolute zero (−273.15 degrees Celsius, −459.67 Fahrenheit) these black dwarfs will engage in some of the slowest-burning explosions imaginable.

When stars die, depending on their size and composition, they can explode in supernovae. But smaller stars, which do not possess the requisite heavy elements to produce nuclear fusion in their cores, transform into burnt-out husks known as white dwarfs.

Over the course of trillions of years, these white dwarfs eventually dim into frozen, utterly dead objects known as black dwarfs, which may prove to be the last survivors of our universe and will ultimately be the ones to ‘turn out the light’ at the end of it all.

These theorized black dwarf supernovas would be the end result of a process known as pycnonuclear fusion in which, thanks to quantum physics, the atomic nuclei within the objects would be crushed closer together than would normally be possible, eventually turning all the elements into iron.

“These reactions take an insanely long time,” said study author Matt Caplan, a theoretical physicist at Illinois State University. “You could wait a million years and not see a single fusion reaction in a black dwarf.”

To put things in perspective, the sun’s nuclear fusion gets through about 10^38 protons per second, whereas the conversion of a black dwarf to iron by pycnonuclear fusion would take between 10^1,100 and 10^32,000 years (those zeros written out would take up the equivalent of up to an entire chapter of a good book).

These slow-cooked iron black dwarfs would then be crushed by their own immense mass, in a runaway collapse, which would in turn trigger an implosion, launching the surface layers outwards from the sphere.

A similar process takes place in larger stars that exist today, triggering what is known as a core-collapse supernova.

The researchers estimate there will be a billion trillion (10^21) of these supernovae before the last one, though there more than likely won’t be anyone or anything around to witness the event. 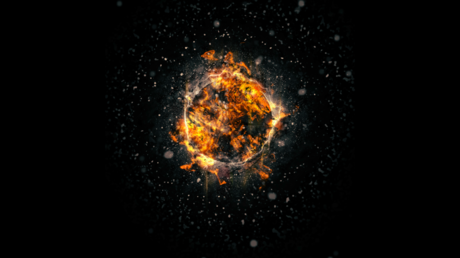 Turkey will keep searching for oil...