A labor union has voted to approve a strike at Escondida, the world’s largest copper mine, located in the Atacama Desert, Chile, where the miners are demanding better work conditions and benefits during the pandemic.

The mine’s Union No 1 said that 2,164 of its members, or 99,5% of those who had voted, had chosen to reject a final contract offer, and that it had approved the strike.

“The resounding result once against demonstrates that… our ranks believe that this offer doesn’t contain any progress towards [addressing] the legitimate demands of the workers,” the union said, in a statement late on Saturday.

It also said the vote should become a “decisive wake-up call” for the mine’s owner, the Australian-based mining giant BHP Group, to start “substantive talks.”

The Federation of Copper Workers (FTC), an umbrella union group, said that miners did not stop contributing to the Chilean economy during the Covid-19 pandemic and are demanding “fair labor and human relations.”

While the exact terms of the offer were not released, the union is demanding an additional bonus equivalent of 1% of dividends paid to the mine’s owners as a recognition of the sacrifices made by workers during the pandemic, according to Chilean media.

BHP said in a statement to Reuters this week that its offer contained improvements to the current work environment, and new benefits, and was a result of conversations with workers.

After the vote, the company said it remains committed to dialogue and reaching an agreement with the union at upcoming government-mediated talks.

During the previous labor dispute in 2017, miners at Escondida went on a strike for more than 40 days, demanding better contracts. 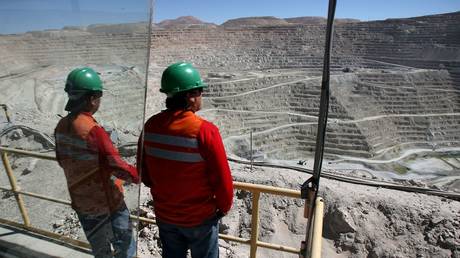 ‘We meant no disrespect’: Israeli...