The US’ decision to remove sanctions exemption for the two pipelines under construction to deliver gas to Europe and Turkey is a textbook example of “unfair competition” through political means, Moscow has said.

The move, which allows the further sanctioning of Russian natural gas projects, has clearly shown the “weakness of the American system,” Russia’s Foreign Ministry spokeswoman Maria Zakharova said on Wednesday.

“This is the use of political pressure for sake of unfair competition,” Zakharova stated. “Except for raw power, they don’t have any effective tools.”

Earlier in the day, US Secretary of State Mike Pompeo announced the decision to lift a provision that exempted the pipelines from the 2017 anti-Russian sanctions package, and threatened investors with consequences.

“It’s a clear warning to companies that aiding and abetting Russian malign influence projects will not be tolerated. Get out now or risk the consequences,” Pompeo said.

The legislation, known officially as the Countering America’s Adversaries Through Sanctions Act (CAATSA), has been designed to ‘punish’ Russia for its alleged activities, such as a claimed interference with the 2016 US presidential election.

Washington has been particularly displeased with the Nord Stream 2 pipeline, repeatedly claiming the multinational business project is actually a sneaky Russian tool to gain political sway in Europe.

The US itself has been actively lobbying European countries to buy its liquefied natural gas (LNG) instead of Russian pipeline gas. While American LNG has, unsurprisingly, turned out to be significantly pricier than the Russian product, the US insists that Western countries should still buy it, and even in all seriousness called it “freedom gas.”

The most recent action against the Nord Stream 2 pipeline was taken by Washington in December, when it disrupted the construction of the project in Danish waters when it was only some 90 miles short of completion. This month, however, Denmark approved a petition that gives the company building the pipeline a technical workaround to the US sanctions, and the works might restart as early as next month.

Another project mentioned by Pompeo, the TurkStream pipeline, is ultimately intended for the European market as well. The first part of the pipeline, connecting Russia and Turkey, was launched early this year, and it is expected to continue further into southern Europe. Its route will likely to go through Bulgaria, Serbia and Hungary, ending in the Baumgarten gas hub near Vienna. 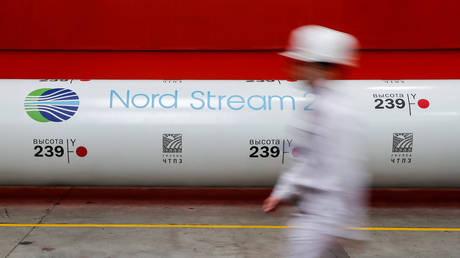 ‘Get out now or risk the consequen...

Why is the US removing Xiaomi from its blacklist? RT’s Boom Bust investigates