Two employees of the United Nations mission in Israel have been suspended without pay after a viral video showed a sex act in their official vehicle, as it drove down a major street in Tel Aviv.

The two men were identified as staff members of the United Nations Truce Supervision Organization (UNTSO), a military observer mission in Israel, and were placed on unpaid leave on Thursday.

The 18-second video shows a man in a white uniform, in the back seat of the marked UN vehicle, being straddled by a woman wearing a red dress as another man looks on from the front seat.

The incident took place on HaYarkon Street, on Tel Aviv’s waterfront. It began making rounds online at the end of June, prompting the UN to open a probe.

Spokesman for the UN’s Secretary-General, Stéphane Dujarric, reacts to the video of couple having sex in one of United Nations’ official car in HaYarkon street in Tel Aviv, Israel, Says the behaviour seen in it is abhorrent and goes against everything that they stand for.. pic.twitter.com/VmEWyS5WKc

The suspensions were appropriate “given the seriousness of the allegations of failing to observe the standards of conduct expected of international civil servants,” Stéphane Dujarric, spokesman for the UN secretary-general, told the BBC on Thursday.

The UNTSO has “re-engaged in a robust awareness-raising campaign to remind its personnel of their obligations to the UN Code of Conduct,” he added. When the video originally emerged, Dujarric told reporters he was “shocked and deeply disturbed” by it.

Reports in Israeli media identified one of the men involved as an officer from Trinidad. The UN has neither confirmed nor denied this.

A UN report on sexual misconduct lists 175 allegations of sexual exploitation and abuse against UN staff members in 2019. Of those, 16 were confirmed, 15 were unsubstantiated, and 144 remain under investigation.

UNTSO was originally established in 1948, to monitor the ceasefire between the newly declared state of Israel and its Arab neighbors. It has somehow remained around even after two major wars in 1967 and 1973 rendered that armistice moot. 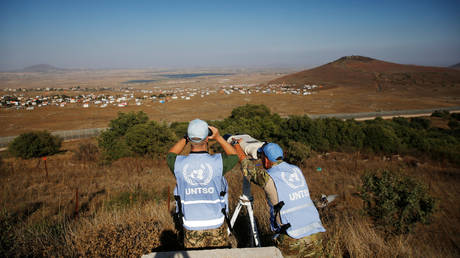 Schools MUST reopen in September –...

Poland will bow to EU’s demand...

Washington’s hysteria about Chinese hypersonic missile threat is just an excuse for its own military expansion, says Beijing