The United Nations High Commissioner for Refugees (UNHCR) has warned Afghanistan faces “a far greater humanitarian crisis,” as nations end their evacuation efforts ahead of the US withdrawal from the country on August 31.

In a statement released on Monday, the UN refugee agency issued a warning to the international community about the situation facing individuals in Afghanistan, as “fear and desperation” grips “thousands” of citizens trying to flee the country.

“The airlifts out of Kabul will end in a matter of days, and the tragedy that has unfolded will no longer be as visible. But it will still be a daily reality for millions of Afghans. We must not turn away. A far greater humanitarian crisis is just beginning,” the UNHCR said.

The agency’s warning comes days after the deputy UN High Commissioner for Refugees, Kelly Clements, forecast that “around 500,000” individuals could attempt to flee the country by the end of the year, calling on neighboring countries to keep their borders open and to accept asylum seekers.

The figures come on top of the roughly 3.5 million people the agency estimates “have already been displaced by violence within the country,” leaving them “in dire need of help” and humanitarian support.

Since the evacuation process began, the UN agency estimates that it has saved tens of thousands of lives but, with roughly 39 million Afghans in the country, the UNHCR called on signatories of the 1951 Refugee Convention to uphold their responsibilities to allow individuals fleeing to “to seek international protection.”

The statement from the UNHCR comes ahead of America’s departure from Kabul airport and as other countries end their evacuation efforts before the August 31 deadline for a full military withdrawal from the country. Australia, Canada, France, Spain and the UK have already ended their airlifts. 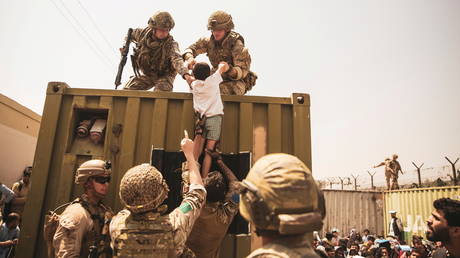