Rocket attacks from Gaza targeting Israeli cities are “unacceptable,” but the Jewish state should show military restraint when it responds, the UN Secretary-General has said, while calling for an end to hostilities.

Antonio Guterres “is deeply saddened to learn of increasingly large numbers of casualties, including children, from Israeli airstrikes in Gaza, and of Israeli fatalities from rockets launched from Gaza,” his spokesman, Stephane Dujarric, said on Tuesday.

The UN chief called on all parties to end the violence, urging the Israeli security forces to “exercise maximum restraint and calibrate their use of force,” while pointing out that “indiscriminate launching of rockets and mortars towards Israeli population centers is unacceptable.”

“This spiraling escalation must cease immediately,” Guterres insisted, adding that the UN was working with all sides to achieve this goal.

Gaza-based Hamas and the Palestinian Islamic Jihad group have fired several hundred rockets at southern Israel since Monday, reportedly killing at least two civilians in the city of Ashkelon and injuring several others. Retaliatory strikes by the IDF have caused some 26 fatalities, including nine children, the Gaza health authorities said.

The latest flare-up followed several days of violent clashes in Jerusalem, in which hundreds were injured. Palestinians took to the streets to protest the looming forced evictions of Palestinian families from their homes in the east of the city.

Earlier on Tuesday, Israeli Prime Minister Benjamin Netanyahu warned that both the strength and frequency of the IDF’s attacks on targets in Gaza will be “increased.”

Shortly after the statement, an Israeli strike destroyed a 13-story residential building in Gaza. According to Israeli media, the residents were warned to evacuate via phone calls and messages ahead of the attack, but it’s unclear if the building had been emptied before it fell.

Hamas responded by firing more than 100 rockets at Tel Aviv and central Israel. Sirens were blaring in the country’s most populous city late on Tuesday, with residents reporting hearing explosions. 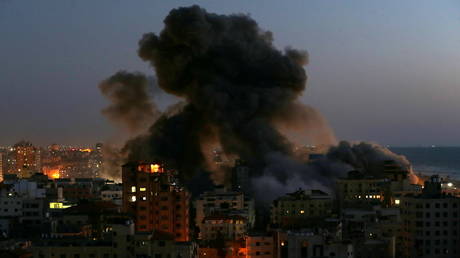