Hundreds of people have been arrested since the controversial new national security law went into effect in Hong Kong, the United Nations has said. It warns that the “vague” legislation could undermine human rights.

UN High Commissioner for Human Rights Rupert Colville said some of the offences prohibited by the new law “do not adequately distinguish between violent and non-violent acts,” and described the legislation as “vague and overly broad.”

This could result in “discriminatory or arbitrary interpretation and enforcement,” and could “undermine human-rights protection,” he told reporters in Geneva on Friday.

Colville said hundreds of people had been arrested at protests on Wednesday, with at least 10 people charged. He said the UN was “alarmed” that arrests were being made “when there is not full information and understanding of the scope of the offences.”

Under the newly introduced legislation, signed by President Xi Jinping on Tuesday, those found guilty of crimes of secession, subversion, terrorism, and collusion with foreign forces may face life in prison. Thousands of demonstrators have taken to the streets since its implementation, resulting in clashes with police.

While decried by activists, the national security law was supported by Hong Kong leader Carrie Lam, who said it was “necessary and timely” to maintain stability. It was adopted following months of violent demonstrations last year, triggered by the introduction of an extradition bill that was eventually shelved, but would have allowed Chinese security agencies to operate within Hong Kong and hand suspected criminals over to Beijing.

Protesters, who were backed by Washington, argued that Beijing was stifling the semi-autonomous territory’s freedoms under the ‘one country, two systems’ formula agreed when Britain returned Hong Kong to Chinese control in 1997.

The law has been slammed by the US, UK and other Western powers, with British Prime Minister Boris Johnson calling it a “serious breach” of London’s agreement with China.

Beijing, which maintains the legislation is necessary to maintain security in the territory, has dismissed the criticism and called on other nations to stop interfering in its internal affairs. 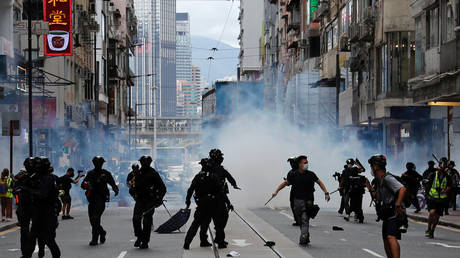 Probe launched amid outrage after...