Canada is investigating the deaths of 38 puppies who were flown in from Ukraine earlier this month in a suspected supply run for a purebred smuggling operation.

The plane from Kiev landed at Toronto Pearson Airport on June 13, but details of the tragedy only reached the media in the past few days.

According to Canada’s Food Inspection Agency, approximately 500 French bulldog puppies were on board, of which 38 were dead on arrival, and many others were “dehydrated and seriously ill.”

Abby Lorenzen, a professional show dog handler who happened to be at the airport’s cargo area to pick up a different animal, called what she saw a “horror show” and “just a nightmare”.

“You could just smell death and kind of feces, urine. That was overwhelming,” Lorenzen told Global News.

She said she saw puppy paws sticking out from the garbage outside the airport’s storage building.

The puppies were already visibly suffering from heat stress when they were loaded onto the plane during hot weather in Kiev, Canada’s National Post reported, citing eyewitness accounts and footage of the process.

The 500 dogs were reportedly put in 300 small cages, meaning many of the animals were sharing containers. The cages were then placed inside the plane’s lower cargo hold, with limited air circulation.

The flight from Kiev was operated by Ukraine International Airlines, which issued a statement on Tuesday after reports of the incident appeared on social media. According to the airline, the plane was operating a charter flight, delivering animals in bulk.

“Transporting thoroughbred puppies, especially brachycephalic dogs such as for example French bulldogs, carries a certain calculated risk, which breeders and all those who ship dogs by air understand very well,” the airline said. “Senders, nevertheless consciously take the risk, since the business of breeders of purebred dogs and cats is some of the most competitive and high-margin ones.”

After the incident was reported by the Canadian media, UIA expressed its “condolences for the tragic loss of animal life” on the flight.

According to the Canadian branch of Humane Society International, the way the animals were loaded on to the plane appears to have been in stark violation of industry animal safety standards.

Lucas Hixson, an animal rights activist, told CBC News that the flight was likely part of a smuggling operation in which greedy dealers were trying to boost their bottom line by loading as many pets as possible onto the plane, with no regard for their wellbeing.

“These commercial operations are run by large puppy mills that house and breed hundreds and thousands of dogs every year in typically unsterile conditions where the dogs are crammed together,” Hixson said.

Law enforcement in Canada and Ukraine are investigating the case. The airline has pledged its full cooperation in the probe. 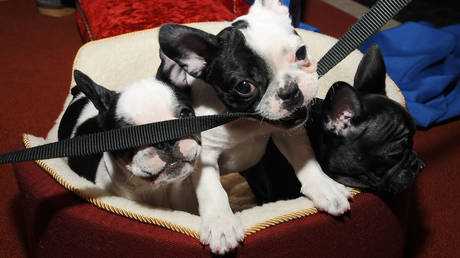