Close
Trending News
HomeWorldUkraine recalls Belarus envoy for consultations ‘for first time ever’, but it’s not about protests

Ukraine recalls Belarus envoy for consultations ‘for first time ever’, but it’s not about protests

Ukraine recalls Belarus envoy for consultations ‘for first time ever’, but it’s not about protests

Kiev has recalled its ambassador from Minsk for consultations, for the “first time in history.” However, the move appears to be more about Belarus’ refusal to hand suspected Russian mercenaries over to Ukraine than the protests.

Ukraine has joined the chorus of Western nations refusing to recognize the results of last week’s elections in Belarus, which officially handed a landslide victory to Alexander Lukashenko for his sixth term in office. “Belarussian-Ukraine relations” have been “fundamentally changed” by the developments in Belarus, in which “society has expressed a vote of no confidence in the official results of the presidential elections,” Ukrainian Foreign Minister Dmytro Kuleba said in a statement.

Belarus has been gripped by large-scale protests for more than a week amid public outrage over the election results. The police’s heavy-handed response to the initial demonstrations has also spilled over into strikes at some of the nation’s industrial giants.

However, while saying Ukraine has recalled its ambassador to Minsk for the first time, Kuleba explained that it was done because of Minsk’s “unacceptable actions” in handing 32 Russians suspected of being private company mercenaries over to Moscow, and ignoring Ukraine’s demand to extradite 28 of them to Kiev.

“This move undermined trust between our nations and dealt a heavy blow to our bilateral relations,” Kuleba said, adding that Lukashenko has “repeatedly and baselessly accused Ukraine of unfriendly actions.”

Kuleba vowed to “rigorously defend” Ukraine’s “national interests,” all while advising Ukrainians against travelling to Belarus amid the wave of protests, citing Russia’s potential “active involvement” in the developments – an idea that Moscow has thus far not raised.

Meanwhile, the Ukrainian Foreign Ministry attached a special note to Kuleba’s statement, pointing out once again that the recalling of an ambassador for consultations is “a form of diplomatic response used to demonstrate dissatisfaction with the polities of unfriendly actions” of a host state.

A group of Russian citizens were detained in Belarus in late July ahead of the presidential elections. The Belarusian security service, the KGB, accused them of being fighters from the Wagner private military contractor company sent into Belarus to prepare “mass riots.” Moscow said the detainees were indeed security contractors but denied the accusations, arguing that Minsk was just a transit point to their final destination.

A twist in the tale came when Ukraine asked for the extradition of 28 out of the 33 detainees, claiming they had previously taken part in a military conflict in the country’s east. Later, an investigation by Russian journalist Aleksandr Kots suggested that the whole story behind their arrest and detention was really a clandestine operation by Ukrainian intelligence.

Lukashenko initially promised to consider Kiev’s request, but the men were eventually handed over to Russia last Friday. 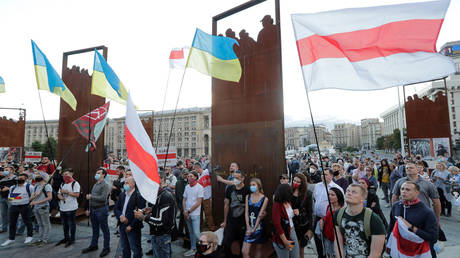