A self-proclaimed alien-hunting expert believes he has spotted an ancient jet engine lying on the surface of Mars. He says it is proof that Martians existed and had technology far superior to our own.

Scott Waring of ET Data Base spotted the “engine” while trawling through photos snapped on the Red Planet by NASA’s Curiosity rover, which has been trundling around Mars’ dusty Gale crater for nearly eight years.

The image was captured on August 30, 2014, which was the rover’s 735th Martian day, or sol, on Mars. In a blog post published this week, Waring highlights a peculiar pattern in the material on the surface and claims that it resembles modern-day jet engines.

The ufologist says the photo proves that aliens once existed on Mars and that they used incredibly advanced transportation technology on the planet.

“The object is old, dented and has a layer of dust on it, but it still stands out clearly from the other objects in the area,” Waring said in the blog post. “This evidence is proof that aliens on Mars did have engines far more advanced than our own. Engines capable of not using wires or tubes, but using micro tech built directly into the object’s structure.”

As well as the alleged engine, the alien enthusiast also pointed out a large pillar that he believes formed part of an ancient structure. He even made the extraordinary claim that the fossilized remains of prehistoric extra-terrestrials could be seen in the photographs.

Waring made his “discoveries” in photos snapped by NASA but, unsurprisingly, the space agency has not commented on the claims, nor has it ever suggested that an alien race once visited Earth’s neighbor. 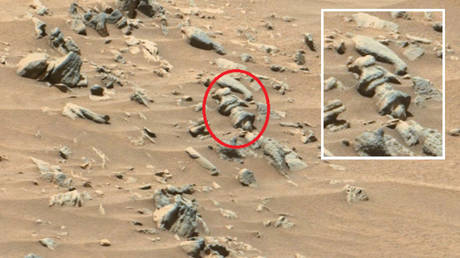