Half of an hour of gameplay from Ubisoft’s ‘Assassin’s Creed Valhalla’ has been leaked online, showing gameplay mechanics and graphics that were not expected to be revealed until the Ubisoft Forward event on July 12.

The video marks the first time gamers have seen footage from the upcoming triple-A title, which is scheduled for release in December on both current and next-gen consoles.

The footage, currently shared on Reddit by user Deathlycz, was first taken down from YouTube after Ubisoft complained of copyright infringement.

As the name suggests, ‘Assassin’s Creed Valhalla’ will take place during the age of the Vikings.

The footage suggests that ‘Valhalla’ will follow the same formula as ‘Assassin’s Creed Origins’ and ‘Assassin’s Creed Odyssey’, the previous two games in the franchise, which swapped out the more city-led stealth gameplay of the series’ early games in favor of wider open-world vistas and bigger battles.

Revealed in the footage are some new gameplay mechanics, such as a skill menu that shows three different gameplay styles and paths: the Bear, the Wolf and the Raven.

Some Reddit users were left unimpressed by the footage, complaining that the game “stutters a lot” and saying the franchise is historically inaccurate due to its inclusion of stone castles, hundreds of years before they were ever built.

Others complained that the game featured the option to play as a female protagonist, stating that “no male Viking would take orders [from] or even go into battle with a woman.”

The complaints follow an internal investigation by Ubisoft into claims of sexual assault and harassment that have been levelled against some of its employees.

On Friday, CEO Yves Guillemot announced that Maxime Beland, vice-president of editorial in Toronto, had resigned.

Another employee, Tommy Francois, vice-president of editorial and creative services based in Paris, was placed on disciplinary leave “pending the outcome of an investigation.” 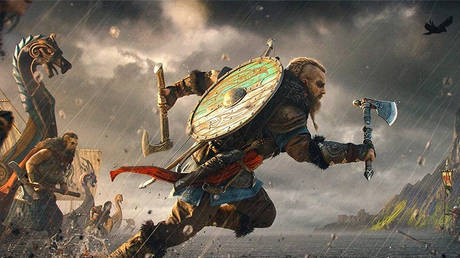