Iran has disclosed that it seized a ship from the United Arab Emirates earlier this week, after the vessel trespassed in its territorial waters. Two Iranian fishermen were reportedly also killed by UAE coast guards the same day.

Iranian security forces took control of the UAE-registered ship on Monday, after it was “detained due to illegal traffic,” Iran’s foreign ministry announced on Thursday.

In a separate incident on the same day, the ministry said that UAE security forces had shot and killed two Iranian fishermen and seized their boat. Iran summoned the UAE ambassador over the altercation, according to reports. The Iranian fishing boat and its crew were later released.

“The UAE has expressed regret for the incident and in a letter on Wednesday announced its readiness to pay compensation,” Tehran said.

The UAE’s state-run WAM news agency reported on Monday that eight fishing boats had illegally crossed into the nation’s waters near Bu Nair Island in the Persian Gulf. The outlet claimed that the vessels did not stop when ordered-to and “rules of engagement were applied.” 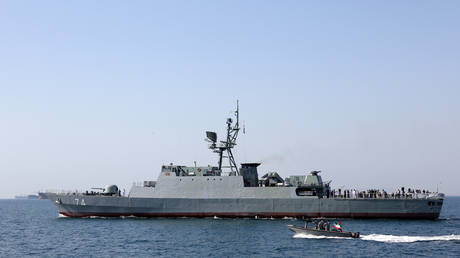