The United Arab Emirates’ agreement to normalize ties with Israel was not directed against Iran, the Gulf state’s foreign affairs minister claimed after the deal was slammed by Tehran.

The UAE on Sunday summoned Iran’s envoy in Abu Dhabi and gave him a “strongly worded memo” in response to a speech by Iranian President Hassan Rouhani that the UAE sees as “unacceptable.”

The UAE had made a “huge mistake” in reaching an agreement with Israel, Rouhani said on Saturday and called it a betrayal by the Gulf state.

However, Emirati Foreign Minister Anwar Gargash tweeted Monday that “the UAE-Israeli peace treaty is a sovereign decision not directed at Iran.” The UAE will not accept interference in its affairs, the minister added.

The US-sponsored deal has been seen as firming up opposition to regional power Iran. The secretary general of the six-member Gulf Cooperation Council on Sunday condemned “threats” by Rouhani and other Iranian officials towards the UAE over the accord.

The Iranian president also said in a speech that the UAE-Israel deal seemed aimed at ensuring US President Donald Trump is reelected in November. Rouhani referred to the fact that the agreement was announced in Washington and concluded: “So a gentleman in Washington wins votes, you betray your country, your people, Muslims and the Arab world?” 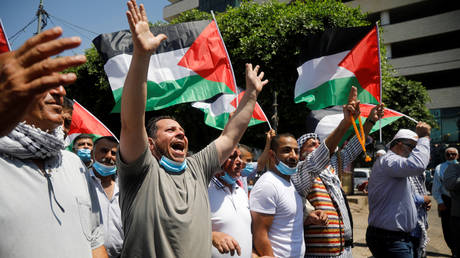