The United Arab Emirates has abolished a 1972 law that banned any deals with Israel, paving the way for signing a series of bilateral agreements with the Jewish state.

A decree cancelling the Israel boycott law was signed by UAE President, Khalifa bin Zayed Al Nahyan, the Emirates News Agency (WAM) reported on Saturday. This makes it legal for Emirati subjects, companies and organizations to have relations with counterparts in Israel.

Residents in the UAE will be able to travel to Israel, conduct business with Israeli companies and participate in other engagements.

The decree furthers the normalization agreement signed by the UAE and Israeli earlier this month and announced by the US, which played the role of a mediator. The two nations agreed to establish formal diplomatic relations and establish a framework for bilateral ties.

The development sparked controversy in the Arab world, with some nations like Turkey accusing Abu Dhabi of betraying the Palestinian cause for egoistic gains. The normalization agreement said Israel would put on hold the proposed annexation of occupied Palestinian territories, but Isreali Prime Minister Benjamin Netanyahu de facto disavowed the provision, saying his government’s plans did not change.

The UAE has had no formal relations with Israel since its creation as a sovereign federacy of seven Arab monarchies in the early 1970s. Sheikh Khalifa, who is also the emir of Abu Dhabi, has served as the Emirati president since 2004, when he replaced his father, Zayed bin Sultan Al Nahyan. 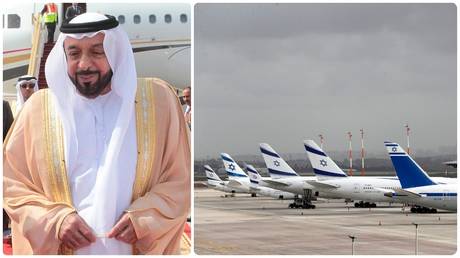