Just one day after World Asteroid Day, NASA’s Center for Near-Earth Object Studies (CNEOS) has warned of two space rocks due to soar through the Earth’s backyard, as planetary defense preparations start to ramp up.

The first of the incoming objects is the 69-foot wide 2019 AC3, an Apollo-class asteroid travelling at roughly 8,000 miles per hour and due to fly past at a safe distance of 2.5 million miles away.

Later on Wednesday, at almost double the size and over twice the speed of its predecessor, the 135-foot, Aten-class asteroid 2020 MK3 will shoot past at 19,000 miles an hour. The asteroid will come much closer to us, passing within 440,000 miles of our planet. While this is a close shave in space rock terms, it’s still over 1.5 times the distance between us and the moon, so there’s nothing to worry about.

The close flyby couldn’t have come at a better time, as the ink dried on a deal between NASA and the US Space Force to combine their resources to track near-Earth objects and better prepare to fight off any potential impact threats – be they planet killers or space rocks on the scale of the Chelyabinsk event.

.@NASA & @SpaceForceDoD have signed an agreement to share data from the USSF Space Surveillance Telescope in Australia with NASA’s Planetary Defense program. Together, NASA, USSF, & RAAF will find & track near-Earth objects (NEOs) to be ready for any potential impact threat. pic.twitter.com/GdKlgnPXH0

As the old saying goes, the best defense is a good offense, and Earth’s planetary defense should be no exception, as the International Astronomical Union has named the first target in testing our mettle against space-based threats.

In late 2022, NASA will conduct its Double Asteroid Redirection Test mission, or DART, against the newly dubbed ‘Dimorphos’ moonlet asteroid – which orbits the larger (524ft) asteroid known as Didymos – in the first-ever asteroid deflection mission, which will take place some 6,835,083 miles from our planet.

“Dimorphos, which means ‘two forms,’ reflects the status of this object as the first celestial body to have the ‘form’ of its orbit significantly changed by humanity – in this case, by the DART impact,” said Kleomenis Tsiganis, a planetary scientist at the Aristotle University of Thessaloniki and the member of the DART team who suggested the name.

“As such, it will be the first object to be known to humans by two, very different forms: the one seen by DART before impact, and the other seen by the European Space Agency’s Hera, a few years later.” 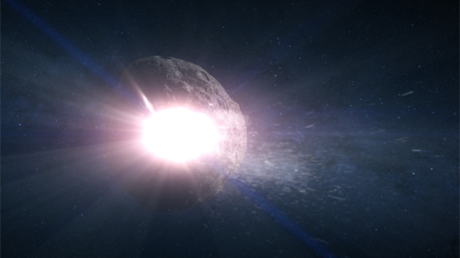