Two US economists have been awarded the Nobel Prize for economic sciences. Paul R. Milgrom and Robert B. Wilson were honored for their advancements in auction theory.

Goran Hansson, the secretary general of the Royal Swedish Academy of Sciences, praised the pair of American economists for their trailblazing research and creation of new types of auction formats. He said that their discoveries greatly improved auction theory, “benefiting sellers, buyers and taxpayers around the world.”

Milgrom and Wilson will be awarded a 10 million Swedish crown ($1.14 million) prize. The award is not one of the five original prizes established by industrialist Alfred Nobel in 1895, but instead was created by Sweden’s central bank in 1969.

BREAKING NEWS:
The 2020 Sveriges Riksbank Prize in Economic Sciences in Memory of Alfred Nobel has been awarded to Paul R. Milgrom and Robert B. Wilson “for improvements to auction theory and inventions of new auction formats.”#NobelPrize pic.twitter.com/tBAblj1xf8

Due to the coronavirus pandemic, the traditional gala winners’ dinner in December has been canceled, with parts of the awards ceremony and celebrations being held online.

The economics prize was the last of six Nobel awards handed out this year. Last week it was announced that the United Nations World Food Programme had won the 2020 Nobel Peace Prize for its contribution to feeding the world and for acting as a driving force in “efforts to prevent the use of hunger as a weapon of war and conflict.” 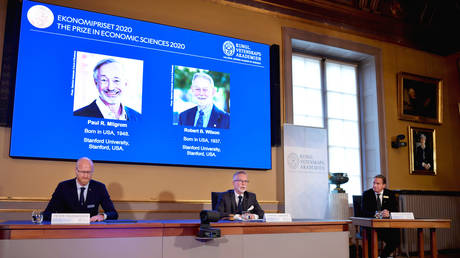