A pair of American drones crashed following a midair collision in Syria, destroying both craft, the Military Times reported. The cause and exact circumstances of the smash-up remain unclear, however, leaving rumors to swirl.

The alleged collision took place over Idlib province on Tuesday, an anonymous defense official told the Times, though offered few other details about the mishap, declining to confirm what caused the crash or what type of drones were involved. Whether the aircraft were fired upon at any point during the incident is also not known, the official said.

Photos and videos circulating online – which show debris falling from the sky and flaming wreckage on the ground – indicate that at least one of the craft was an American MQ-9 Reaper drone, used for both surveillance and armed missions.

At least one of the drone that was downed over Idlib Province in Syria could be US MQ-9. pic.twitter.com/tml8MfVRzW

BTW it seems there two big UAVs were shot down. As we can see above, one is MQ-9, second possible also MQ-9 or another big UAV. pic.twitter.com/f09EVMTyPL

With no official explanation for the incident, however, speculation was rife on social media, with some suggesting the drones were shot down by Turkish-backed militants, while others posited that a Russian drone had been downed, despite the Times report pinning both craft as American.

Breaking. #Turkey shot down a drone (likely #Russia|n) near the border. It was monitoring an area previously bombed by #RuAF (N. #Idlib). pic.twitter.com/l3Or3f8FdN

The wreckage of a drone that was shot done over idlib area in #Syria today
pic.twitter.com/X1mjgiPdog

The reported collision comes days after a US assassination strike on a jihadist trainer based in Idlib, Abu Yahyah al-Uzbeki, who was alleged to work alongside the Al-Qaeda-linked Hurras ad-Din group. The strike is believed to have used an R9X Hellfire missile, a special non-explosive munition that unleashes six sword-like blades before impact – dubbed the “ninja bomb.”

ANOTHER footage of the drone that was shot down over Kafr Takharim, west of Idlib. #Syria pic.twitter.com/ujhqQ7CqAK

VIDEO showing a drone that was shot down west of Idlib, near the Turkish border. #Syria pic.twitter.com/Qppv94ITgg

Though Damascus has repeatedly slammed the American presence in Syria as illegal and a violation of the country’s sovereignty, Washington continues military operations in several regions, carrying out intermittent strikes around Idlib and embedding soldiers with Arab and Kurdish proxy groups in the south and northeast. Backed by the Pentagon throughout Syria’s war, the Kurdish-led factions now control valuable oil resources, with US plans to train a 2,200-man “oilfield guard” in the Hasakah region, according to a recent Inspector General report. 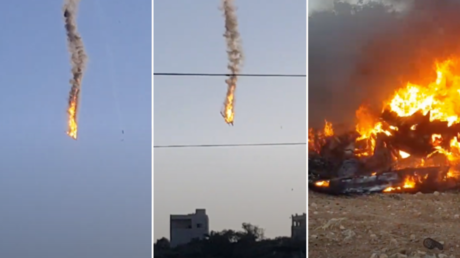