Turkish President Recep Tayyip Erdogan has signed a decree opening the world-famous Hagia Sophia as a mosque, after a court ruled that its conversion to a museum in the 1930s was unlawful.

The court ruled on Friday that the 1934 decree converting the ancient Byzantine cathedral into a museum was not lawful. Immediately after the ruling, Erdogan shared a copy of a decree on Twitter, mandating that the site be turned over to the country’s religious directorate and reopened for worship.

Dating back to the 6th century, the Hagia Sophia is one of the most visited cultural sites in Turkey, as well as a UNESCO World Heritage Site.

UNESCO has expressed concern over Erdogan’s vision for the historic structure, noting in a statement on Friday that the building has a “strong symbolic and universal value.” It called on Turkey to “engage in dialogue” before taking any steps that might impact its universal value.

Even before his decree was issued, the Turkish president’s plan was condemned by leaders of the Russian and Greek Orthodox churches, who warned that it would be seen as an affront to Christians and create a fracture between East and West. Washington has also urged Turkey to maintain the Hagia Sophia as a museum.

Moscow has also highlighted the cultural significance of the building while acknowledging that the matter was an “internal affair” for Turkey.

Erdogan spokesperson Ibrahim Kalin has said that opening the Hagia Sophia for worship will not prevent local or foreign tourists from visiting the iconic site and that a loss of the structure as a world heritage site “is not in question.”

“Turkey will still preserve the Christian icons there, just like our ancestors preserved all Christian values,” he told the Anadolu Agency on Thursday. 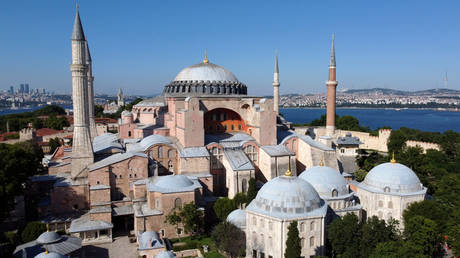 No blasts occurred outside Tehran...

Boris Johnson tells Brits to get b...