A massive wildfire raging in Turkey’s southern province of Mugla has encroached onto the site of a local power plant, threatening to burn the facility down. The plant has been evacuated, and the local electricity supply cut off.

Fires which have ripped through southern and western provinces of Turkey over the past few days reached the Kemerkoy power station late on Wednesday. The coal-fired facility is located near the coast, east of the major resort city of Bodrum.

The news was broken by Muhammet Tokat, the mayor of the nearby town of Milas, located to the north of the plant. “Flames have entered the thermal power plant,” the official tweeted, adding that the site has been already evacuated.

A short video posted by Tokat on Twitter shows flames raging at the premises, with a forest burning on nearby hilltops. Other videos circulating online show flames raging along the side of the road close to the power station.

The wildfire already threatened the Kemerkoy power plant the day before, but was declared contained earlier on Wednesday. A sudden change of wind, however, apparently jeopardized efforts to keep the flames out of the plant.

The surrounding area has been engulfed in a thick plume of smoke, other available images show. The fire has already caused the electricity supply to be cut off in the area, with sparks seen falling from the power lines and loud bangs heard, according to local media reports.

It was not immediately clear whether the power plant itself had caught fire, though some footage circulating online purports to show open flames raging right next to its buildings.

The wildfire inferno continues to sweep across southern and western parts of Turkey, after burning for about a week already. At least eight people have been killed by the worst-in-years fires, while thousands, including foreign tourists, have been evacuated.

The blazes have also destroyed numerous residential homes and other properties, inflicting heavy economic damage to the country apart from devastating its pristine forests. 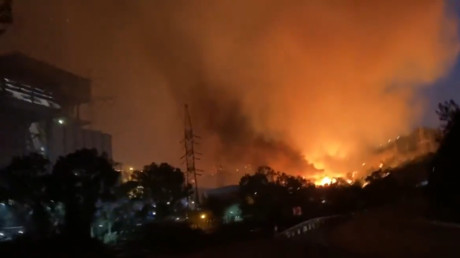