Turkey has slammed France’s “dishonest approach” to the Libyan conflict and accused it of seeking to increase Russia’s role there, after Macron claimed Ankara’s actions posed a “threat to Africa and Europe.”

Turkey’s harsh words come in response to the French president accusing it of “criminal responsibility” over its involvement in the conflict.

Many EU member states are “uncomfortable” with France’s actions, but they don’t speak up since they are afraid of losing European funding after the Covid-19 pandemic, Turkish Foreign Minister Mevlut Cavusoglu claimed on Tuesday.

“Does France act honestly? No,” he said. “NATO sees Russia as a threat. But France is trying to increase Russia’s influence.”

He clarified that Ankara is “working with the Russians for a ceasefire,” while France led by Macron uses a “colonialist approach” in Libya, just like it did back in 2011, when Paris “bombed and left.”

“Who does France support? It supports the putschist and the pirates. France does not act honestly, saying that it did not give Hafter a gun,” Cavusoglu added.

Russia has been accused multiple times of backing Libyan National Army commander General Khalifa Haftar as well. Russian FM Sergey Lavrov clarified last year that Moscow supports “all Libyan political forces so that they agree among themselves and so that no one imposes anything on them.”

Lavrov stressed in February that Russia and other external players are trying to help “Libyans rebuild what has been destroyed through the most blatant breach of UN Charter principles.” He added that Russia doesn’t see Haftar’s forces as a symbol of separatism, since Haftar heads one of the parties of the conflict, and that was recognized by the UN. 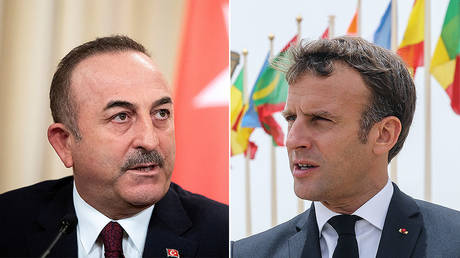