Turkey’s Constitutional Court has accepted the indictment of the pro-Kurdish Peoples’ Democratic Party (HDP), allowing a case seeking to ban the country’s third-largest political group over claims its linked to terrorists.

The case had been sent back to the Court of Cassation from the Constitutional Court in March over procedural issues but, after the lawsuit was refiled this month, Turkey’s top court ruled that the indictment could proceed, according to the country’s state media agency, Anadolu.

The decision of the country’s Constitutional Court marks a victory in the chief public prosecutor’s attempts to outlaw the party, closing its bank accounts and banning its members from the nation’s political system.

In the lawsuit, chief public prosecutor Bekir Sahin claimed that the HDP was undemocratic and colluded with the Kurdistan Workers’ Party, which had previously been listed as a terrorist organization by Turkey, the United States, the European Union, and other nations.

Defending the case against claims that it was a politically motivated attempt to suppress democracy in Turkey, Sahin claimed action was required against the HDP for engaging in “activities aimed at destroying and abolishing the indivisible unity of the state.”

While human rights groups have contested the lawsuit for infringing on the right of the party to participate in the democratic process, Sahin has justified the indictment by citing the HDP’s refusal to condemn the PKK and terrorist activity, citing guidelines from the European Court of Human Rights.

The Turkish government has cracked down on the HDP in recent years, detaining district heads of the party and other officials in March in a series of raids in Istanbul and elsewhere over similar accusations of links to militants. 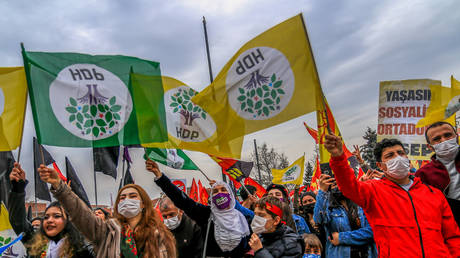