The Turkish drill ship Yavuz has left the area where it was operating southwest of Cyprus. Nicosia sees the move as a step in the right direction amid efforts to diffuse tensions in the eastern Mediterranean.

The Yavuz left Block 6 inside Cyprus’ exclusive economic zone (EEZ) and was near the port of Tasucu in Turkey’s Mersin province on Monday morning, according to shipping data.

Turkey’s navigational telex (Navtex) earlier showed that the vessel had been scheduled to leave the sea area southwest of Cyprus on October 12. It was not immediately clear if the ship left the region for good.

The Yavuz began operations east of Cyprus in July 2019, after Turkey deployed it, along with the Fatih drilling ship, to the west and east of Cyprus. The Turkish oil company’s seismic research ship Barbaros Hayreddin Pasa is conducting operations to the south of Cyprus.

The government in Nicosia said on Monday that the departure of the Yavuz from Cyprus’ exclusive economic zone is a positive development, but it will take time to “better evaluate the situation,” according to spokesman Kyriakos Koushos.

Nicosia is also continuing to monitor the operations of the Barbaros in Block 3 southeast of the island as the Navtex for the ship expires on October 18.

Cyprus had earlier called on the EU to impose sanctions against Ankara over “illegal drilling operations.” Turkey says it is conducting exploration work in the region in line with the licenses it had received from the Turkish Republic of Northern Cyprus, a self-declared state on the divided island which is recognized only by Ankara.

An EU summit late last week postponed a decision on possible sanctions, warning Ankara they would be imposed if “provocations” were not stopped.

However, the head of Cyprus’ Democratic Rally party (DISY) said on Monday that the ship’s departure was a response to all those who had downplayed the recent EU summit decisions.

Ankara says sanctions will not scare it. “Sanctions against Turkey and the language of blackmail and threats will never yield success,” Presidential Spokesperson İbrahim Kalin said late September. “European politicians should have seen this by now.”

Turkey is also in a dispute with Greece over energy resources and maritime borders. The two sides postponed their next round of technical talks on the eastern Mediterranean, Turkish security sources said on Sunday. 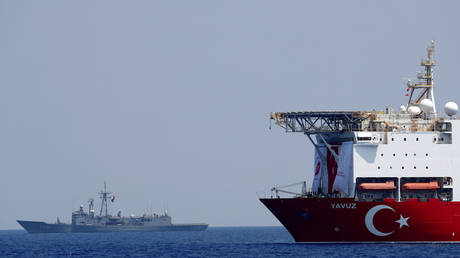