Close
Trending News
HomeWorldTurkey will keep searching for oil & gas in Mediterranean, attempts to turn it away are ‘pipe dreams’ – defense chief

Turkey will keep searching for oil & gas in Mediterranean, attempts to turn it away are ‘pipe dreams’ – defense chief

Turkey will keep searching for oil & gas in Mediterranean, attempts to turn it away are ‘pipe dreams’ – defense chief

In a move sure to escalate its territorial spat with Greece, Turkey prolonged a research mission in contested Eastern Mediterranean waters, with Ankara saying it won’t be scared away by Athens’ military drills in the area.

The Turkish government has ordered the ‘Oruc Reis’ vessel to continue with experimental drilling and seismic works in the Eastern Mediterranean, where gas and oil deposits were recently discovered. The research mission, originally scheduled to end on Thursday, was extended by a few more days until September 1.

In a separate twist, Turkey’s navy issued a maritime advisory, known as Navtex, warning passing ships of a live-fire exercise that will take place near Iskenderun, northeast of Cyprus.

Notably, Greece has launched rival drills off the island’s southern shores, with the French and Italian militaries participating.

Firing back in response to the apparent geopolitical message, Defense Minister Hulusi Akar said it would be “a pipe dream” to believe that “it would be possible to thwart the Turkish Armed Forces’ operations with exercises and similar activities.”

President Recep Tayyip Erdogan issued a similar statement on Wednesday, saying that Ankara won’t compromise on “what it is entitled to” in the Mediterranean, Black and Aegean Seas.

Both Greece and Turkey assert overlapping claims to parts of Eastern Mediterranean waters surrounding the islands of Crete and Cyprus. While upping the ante in the recent war of words, both sides have nonetheless signaled readiness for diplomatic dialogue. 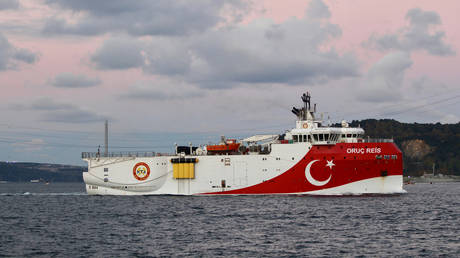