Turkey will do what is necessary if Greece escalates Mediterranean conflict, foreign minister warns

Turkey will do what is necessary if Greece escalates Mediterranean conflict, foreign minister warns

Mevlut Cavusoglu said that his country is open to dialogue, but not with Greece’s pre-conditions amid the ongoing sea shelf oil drilling dispute.

Turkey’s top diplomat discussed the ongoing tensions Tuesday in Ankara during a joint press conference with his German counterpart Heiko Maas. The Turkish representative reiterated that his side would have no hesitation if a conflict with Greece occurs.

In Ankara Maas represented Germany’s position and largely the European Union’s, saying that the ongoing diplomatic crisis put Turkey’s relationship with the EU at a crossroads.

Before his visit to the talks the minister said that “the current situation in the eastern Mediterranean is equivalent to playing with fire.” “Every little spark can lead to catastrophe,” he added.

Maas said that visible steps toward de-escalation are required, and that both Germany and Turkey must open up to dialogue. He also noted that he believed a compromise is within reach, however complicated it may be.

Turkey and Greece have both been NATO allies for decades, despite problems in diplomatic relations. The two nations have clashed over the discovery of oil and gas deposits in a disputed sea region off the shore of the island of Crete back in July.The latest standoff began when Ankara unilaterally deployed a research vessel to the potential drilling site. The tensions heightened on Monday when Turkey announced it will extend the ship’s stay until August 27. 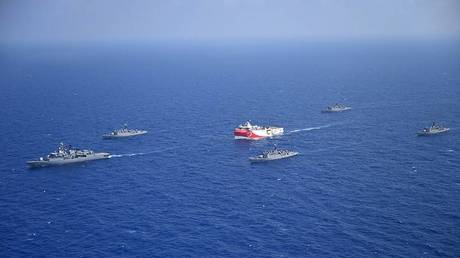 Do they look alike to you? NBC roa...