Close
Trending News
HomeWorldTurkey & US should ‘leave troubles behind’, Erdogan says, ahead of meeting Biden at NATO summit

Turkey & US should ‘leave troubles behind’, Erdogan says, ahead of meeting Biden at NATO summit

Turkey & US should ‘leave troubles behind’, Erdogan says, ahead of meeting Biden at NATO summit

Turkey’s President Recep Tayyip Erdogan has struck a conciliatory tone ahead of meeting his US counterpart, Joe Biden, stating that he was willing to talk and to “leave behind” the issues in relations between the two countries.

Speaking to reporters ahead of a NATO meeting scheduled for Monday, Erdogan signaled that Ankara would like to end the bitter feud with Washington that has soured the past few years.

“We need to put Turkey-US ties on the table first-hand,” Erdogan said. “There was a lot of gossip internally and externally, so we need to talk about how we can leave these troubles behind, what we can do, and what we will do. Turkey is not just any country – it is an allied country.”

Striking a conciliatory tone, Erdogan nonetheless reeled off quite a list of bilateral issues that would have to be addressed at the earliest opportunity. Many of them revolves around the “defense industry,” he said, referencing the US removal of Turkey from the F-35 program, following Ankara’s purchase of a Russian-made S-400 air-defense missile system.

“The most important one of these is the F-35 issue. On this issue, unfortunately, there is Turkey that has realized its promises and the United States that has not kept its [promises] or abided by the contract,” Erdogan said. Another issue he raised was Washington’s refusal to sell Turkey Patriot anti-aircraft systems.

While most of the hostile moves between Turkey and the US occurred under the Trump administration, a new one has been added to Erdogan’s aforementioned list. The Turkish president vowed to address the US’ decision, made by Biden’s administration back in April, to designate the massacre of Armenians in the Ottoman Empire during the First World War as a genocide.

“An ally country taking such a stance on an issue that has nothing to do with NATO, the issue of the Armenians, has disturbed and upset us. It is not possible to go on without reminding [Biden of] this,” Erdogan said. 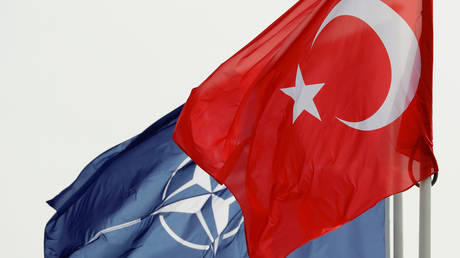 Amid ‘sausage war’ spat with BoJo,...