Ankara has summoned diplomatic envoys from the EU, Germany and Italy in protest over an attempt to search a Turkish cargo ship heading to Libya on the suspicion it was transporting embargoed weapons.

A note has been presented to the ambassadors, saying that the search violated international law, Turkey’s Foreign Ministry said on Monday.

German servicemen from the Hamburg frigate, which has been patrolling the Mediterranean as part of EU’s Irini operation to uphold an arms embargo on Libya, boarded a Turkish freighter overnight about 200km (125 miles) north of the Libyan coastal city of Benghazi.

However, they couldn’t finish their search of the ship due to vigorous protests from Turkey. The German Defense Ministry acknowledged that by the time the troops left they had not “found anything suspicious,” but insisted that all procedures were followed correctly.

Earlier, Turkey blasted the inspection as an “unauthorized and forceful act,” saying that the vessel was only carrying paints and humanitarian aid. Foreign Ministry spokesperson, Hami Aksoy, complained that the crew of the ship were “treated like criminals” during the search. Ankara reserved the right for “all kinds of compensation” from the EU, he added.

Aksoy also questioned the legitimacy and the purpose of the Irini Operation, suggesting that it was biased and only aimed “to punish” the Government of National Accord (GNA) in Libya – while allowing the ships carrying cargo for the rivaling forces of Khalifa Haftar to travel unchecked.

Turkey’s support for GNA in the Libyan conflict has been one of many grievances between Ankara and Brussels, which include Turkish backing for Azerbaijan in the Nagorno-Karabakh dispute, and its aggressive rivalry with Greece and Cyprus for maritime jurisdiction and energy exploration rights in the Mediterranean.

The European Commission is scheduled to hold a meeting in December to decide if Ankara deserves to be sanctioned over its “expansionist” policies. 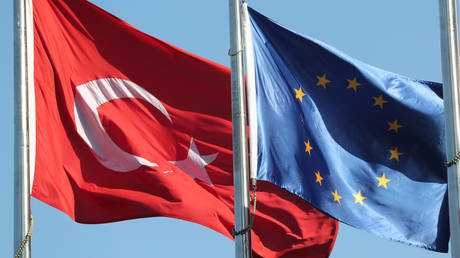