Ankara has issued a new Navtex maritime advisory, stating it will hold military exercises in the Eastern Mediterranean in the next two weeks. The announcement comes amid a tense territorial dispute with Turkey’s neighbor Greece.

The live-fire drills will be held between August 29 and September 11, according to the advisory issued by the country’s navy late on Friday. The area marked for the exercise lies to the south of the town of Anamur, between the Turkish coast and Cyprus.

The announcement follows other advisories issued by Turkey this week. Ankara previously announced a gunnery exercise in the Eastern Mediterranean for September 1-2, and extended the survey mission of its Oruc Reis research vessel, which was set to end this Thursday.

Oruc Reis, backed up by several military vessels, has been conducting oil and gas exploration in the contested waters of the Eastern Mediterranean close to the Greek islands, adding to the tensions between the two NATO allies. The increased activity in the region has resulted in several incidents between the two nations. The latest one came late on Friday, when six Greek F-16s approached the area affected by Ankara’s Navtex and were driven away by their Turkish counterparts.

Both Greece and Turkey assert overlapping claims to parts of the waters surrounding the islands of Crete and Cyprus. Ankara’s claims have been bolstered by its maritime agreement with the UN-recognized government of Libya, reached last year. The deal has been rejected by Greece, however, as well as a number of other countries, including France. Despite the mounting international pressure, Ankara has refused to back down, vowing to continue oil and gas exploration in the troubled waters. 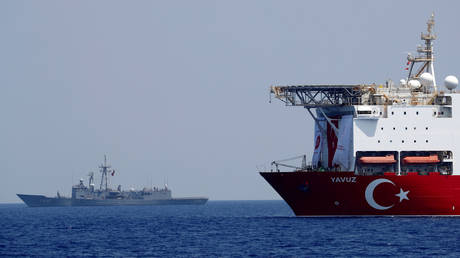