Foreign Minister Mevlut Cavusoglu said on Monday that Turkey has offered to resume exploratory talks with Greece on hydrocarbon resources in the Eastern Mediterranean, as Ankara wants to improve ties with the European Union.

The two neighbors and NATO members have been at loggerheads over maritime exploration rights in the Mediterranean, among other issues. “We want to make an official invitation. As of today, we urge Greece to start exploratory talks, with the first meeting to be held within the month of January,” Cavusoglu said. “So Greece has no excuse right now.”

Athens and Ankara held 60 rounds of talks between 2002 and 2016. Last year, Greece refused to resume discussions after Turkey deployed a seismic exploration vessel to the disputed area. Ankara has since recalled it.

Greece’s Foreign Ministry said on Monday that Athens has not received a formal invitation from Turkey. However, Athens “has expressed its intention to respond to any such invitation… on the issue of demarcation of an Exclusive Economic Zone (EEZ) and the continental shelf,” a spokesman added.

Cavusoglu made his statement on Monday, speaking in Ankara alongside his Turkish Cypriot counterpart, while insisting that there must be a two-state solution in Cyprus.

The EU threatened to impose sanctions on Ankara amid its dispute with both Greece and the Greek Cypriots over rights to offshore resources, but the move was postponed until March.

Turkey had earlier floated a proposal for an Eastern Mediterranean conference, and the suggestion could be discussed when Cavusoglu meets EU ambassadors on Tuesday in Ankara. The migrant deal and customs union with Brussels, as well as visa liberalization for Turks, are also on the agenda.

The diplomatic moves follow President Recep Tayyip Erdogan’s promise late last year to turn a new page with the EU. On Saturday, he stressed that Turkey sees its future in Europe. 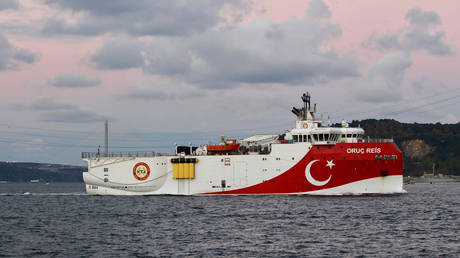