Yerevan’s claims that a Turkish F-16 attacked and destroyed an Armenian Su-25 fighter jet are false, a Turkish presidential spokesman insisted, echoing the position voiced by the Azeri Defense Ministry.

Altun has urged Armenia to curb “cheap propaganda games” and withdraw its troops from “occupied territories” in the disrupted Nagorno-Karabakh region.

He was echoed by Azeri Defense Ministry spokesman, Vagif Dergahli, who blasted reports of Turkish jets fighting for Azerbaijan as “lies and another fantasy of the Armenian military-propagandist machine.”

Earlier on Tuesday, Armenia announced that a Turkish F-16 shot down one of its planes. The Su-25 was targeted while in Armenian airspace, and the pilot was killed in the attack, according to officials in Yerevan.

The statement came just hours after Ankara pledged to help Azerbaijan to repel what it called “Armenian aggression” amid a new flare-up between Baku and Yerevan over the disputed Nagorno-Karabakh region.

Nagorno-Karabakh has been a bone of contention between Azerbaijan and Armenia for decades, with the two neighbors fighting a bloody war over it in the 1990s. The region is internationally recognized as Azerbaijan’s territory, but the local majority-Armenian population denies Azeri rule. Baku considers Nagorno-Karabakh to be illegally occupied by Yerevan.

Tensions in the area spiked again on Sunday after an exchange of fire between Azeri and ethnic-Armenian soldiers. Both Baku and Yerevan accused each other of initiating the violence and killing civilians as a result of strikes. 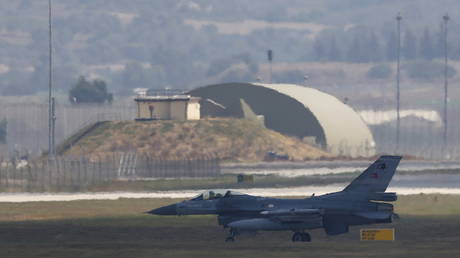